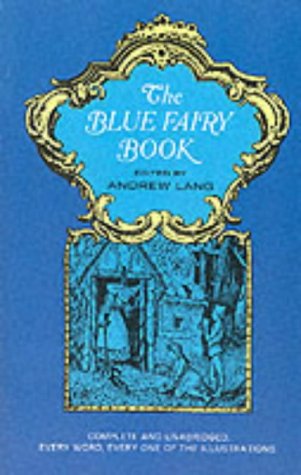 Finest stories from around the world ― most of them old favorites: "Sleeping Beauty," "Rumpelstiltskin," "Cinderella," "The Arabian Nights," 33 more. Includes original 138 black-and-white illustrations.

It is almost impossible to envision what childhood would be like without the enchanting world of fairyland. Cinderella, Little Red Riding Hood, giants and dwarfs, monsters and magicians, fairies and ogres--these are the companions who will thrill young boys and girls of all lands and all times, as Andrew Lang's phenomenally successful collections of stories have proved. From the day that they were first printed, the Lang fairy tale books of many colors have entertained thousands of boys and girls, as they have also brought pleasure to the many parents who have read these unforgettable classics to their children.
The Blue Fairy Book was the first volume in the series and so it contains some of the best known tales, taken from a variety of sources: not only from Grimm, but exciting adventures by Charles Perrault and Madame d'Aulnoy, The Arabian Nights, and other stories from popular traditions. Here in one attractive paperbound volume--with enlarged print--are "Sleeping Beauty," "Rumpelstiltskin," "Beauty and the Beast," "Hansel and Gretel," "Puss in Boots," "Trusty John," "Jack the Giantkiller," "Goldilocks," and many other favorites that have become an indispensable part of our cultural heritage.
All in all, this collection contains 37 stories, all narrated in the clear, lively prose for which Lang was famous. Not only are Lang's generally conceded to be the best English versions of standard stories, his collections are the richest and widest in range. His position as one of England's foremost folklorists as well as his first-rate literary abilities makes his collections unmatchable in the English language. Unabridged and unaltered republication of first (1891) edition.

Andrew Lang (March, 31, 1844 July 20, 1912) was a Scottish writer and literary critic who is best known as a collector of folk and fairy tales. Lang s academic interests extended beyond the literary and he was a noted contributor to the fields of anthropology, folklore, psychical research, history, and classic scholarship, as well as the inspiration for the University of St. Andrew s Andrew Lang Lectures. A prolific author, Lang published more than 100 works during his career, including twelve fairy books, in which he compiled folk and fairy tales from around the world. Lang s Lilac Fairy and Red Fairy books are credited with influencing J. R. R. Tolkien, who commented on the importance of fairy stories in the modern world in his 1939 Andrew Lang Lecture On Fairy-Stories.