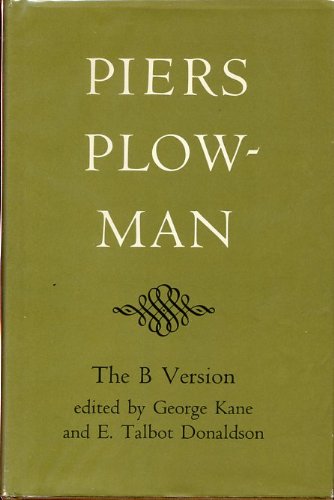 William Langland's 14th-century poem Piers Plowman is a disturbing and often humorous commentary on corruption and greed that remains meaningful today. The allegorical and satirical work revolves around the narrator's quest to live a good life, and takes the form of a series of dreams in which Piers, the honest plowman, appears in various guises. Characters such as Conscience, Fidelity and Charity tumble out of the text alongside Falsehood and Guile, and are instantly recognizable as our present-day politicians and celebrities, friends and neighbors. Along the way social issues are confronted, including governance, economic relations, criminal justice, public finance, marital relations and the limits of academic learning, as well as religious belief and the natural world.

Book Description Hardcover. Condition: GOOD. Spine creases, wear to binding and pages from reading. May contain limited notes, underlining or highlighting that does affect the text. Possible ex library copy, will have the markings and stickers associated from the library. Accessories such as CD, codes, toys, may not be included. Seller Inventory # 3416290712

Book Description Hardback. Condition: Very Good. The book has been read, but is in excellent condition. Pages are intact and not marred by notes or highlighting. The spine remains undamaged. Seller Inventory # GOR008360093