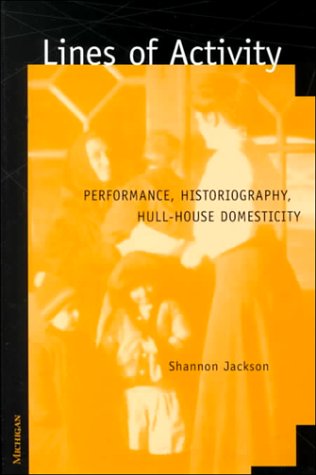 Lines of Activity investigates the cultural life of the Hull-House Settlement of Chicago, one of the most significant reform institutions of the Progressive Era, from its founding in 1889 through its growth into a major social service institution. The book focuses specifically on the role of performance - not only theatrical representation, but also athletics, children's games, storytelling, festivals, living museums, and the practices of everyday life - to demonstrate how such cultural rituals could propel social activism at Hull-House and paradoxically serve as vehicles for both cultural expression and cultural assimilation.
Developing a concept of "reformance" as a process that both restores and resists conventional behavior, Jackson demonstrates how performance analysis can contribute to the historical study of American reform as well as to critical inquiry on the arts and social change. She develops connections between performativity and sex/gender difference by interpreting Hull-House as a sphere of queer kinship and alternative gender performance. Lines of Activity also engages a variety of debates on the nature of historical representation and the role of theory in historical writing.
By selecting the Progressive Era and Hull-House as arenas of inquiry, Jackson foregrounds how past discourses of domesticity, pragmatism, transnationalism, and environmentalism already contain performance-centered notions of identity, space, and community. Through these and other arguments, Lines of Activity reveals the intimate connection between a history of Hull-House performance and the performance of Hull-House history.
This book contributes to the interdisciplinary field of performance studies while simultaneously demonstrating how performance studies engages the central questions and methods of related fields such as American Studies, sex/gender theory, cultural studies, literary theory, theater, folklore, and history.

Shannon Jackson is Assistant Professor of Rhetoric and of Dramatic Art and Dance, University of California, Berkeley.

Book Description Univ of Michigan Pr, 2000. Condition: Good. A+ Customer service! Satisfaction Guaranteed! Book is in Used-Good condition. Pages and cover are clean and intact. Used items may not include supplementary materials such as CDs or access codes. May show signs of minor shelf wear and contain limited notes and highlighting. Seller Inventory # 0472111124-2-4