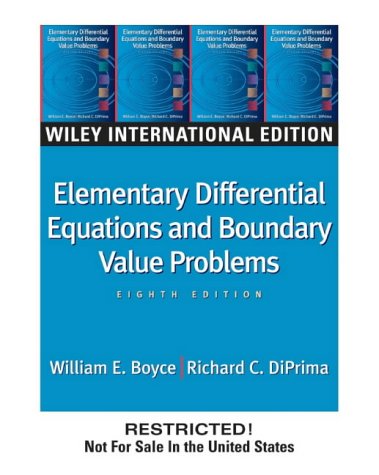 This revision of the market–leading book maintains its classic strengths: contemporary approach, flexible chapter construction, clear exposition, and outstanding problems. Like its predecessors, this revision is written from the viewpoint of the applied mathematician, focusing both on the theory and the practical applications of Differential Equations as they apply to engineering and the sciences. Sound and Accurate Exposition of Theory––special attention is made to methods of solution, analysis, and approximation. Use of technology, illustrations, and problem sets help readers develop an intuitive understanding of the material. Historical footnotes trace development of the discipline and identify outstanding individual contributions.

William E. Boyce received his B.A. degree in Mathematics from Rhodes College, and his M.S. and Ph.D. degrees in Mathematics from Carnegie–Mellon University. He is a member of the American Mathematical Society, the Mathematical Association of America, and the Society for Industrial and Applied Mathematics. He is currently the Edward P. Hamilton Distinguished Professor Emeritus of Science Education (Department of Mathematical Sciences) at Rensselaer. He is the author of numerous technical papers in boundary value problems and random differential equations and their applications. He is the author of several textbooks including two differential equations texts, and is the coauthor (with M.H. Holmes, J.G. Ecker, andW.L. Siegmann) of a text on using Maple to explore Calculus. He is also coauthor (with R.L. Borrelli and C.S. Coleman) of Differential Equations Laboratory Workbook (Wiley 1992), which received the EDUCOMBest Mathematics Curricular InnovationAward in 1993. Professor Boyce was a member of the NSF–sponsored CODEE (Consortium for Ordinary Differential Equations Experiments) that led to the widely–acclaimed ODE Architect. He has also been active in curriculum innovation and reform. Among other things, he was the initiator of the Computers in Calculus project at Rensselaer, partially supported by the NSF. In 1991 he received theWilliam H.Wiley Distinguished FacultyAward given by Rensselaer.

Richard C. DiPrima (deceased) received his B.S., M.S., and Ph.D. degrees in Mathematics from Carnegie–Mellon University. He joined the faculty of Rensselaer Polytechnic Institute after holding research positions at MIT, Harvard, and Hughes Aircraft. He held the Eliza Ricketts Foundation Professorship of Mathematics at Rensselaer, was a fellow of the American Society of Mechanical Engineers, the American Academy of Mechanics, and the American Physical Society. He was also a member of the American Mathematical Society, the Mathematical Association of America, and the Society for Industrial and Applied Mathematics. He served as the Chairman of the Department of Mathematical Sciences at Rensselaer, as President of the Society for Industrial and Applied Mathematics, and as Chairman of the Executive Committee of the Applied Mechanics Division of ASME. In 1980, he was the recipient of theWilliam H.Wiley Distinguished Faculty Award given by Rensselaer. He received Fulbright fellowships in 1964 65 and 1983 and a Guggenheim fellowship in 1982 83. He was the author of numerous technical papers in hydrodynamic stability and lubrication theory and two texts on differential equations and boundary value problems. Professor DiPrima died on September 10, 1984.

Take advantage of valuable study resources to succeed in your course

This new edition of Boyce & DiPrima s Elementary Differential Equations and Boundary Value Problems, 8/e, and the accompanying supplements have been carefully developed to give you the support you need to succeed in your course.  The Eighth Edition gives you a CD–ROM with powerful ODE Architect modeling software and an array of web–based learning tools to support your studies.

The web–based learning tools include: