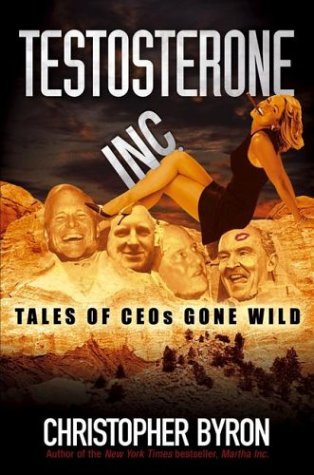 In "Testosterone Inc.: Tales of CEOs Gone Wild", bestselling author and "New York Post" columnist Chris Byron chronicles the Gatsby-like saga of the rise and fall of the celebrity CEO. During the height of the 1990s bull market, they were America's new heroes: the heroes of business. They were our bold new leaders, cutting the fat, pushing for productivity, implementing visionary plans, and making strategic deals. When the bull market turned to bust and the applause turned to cat-calls, the world was shocked at the truth. Drenched in money and public acclaim, our CEO-heroes - mostly white, mostly male, mostly middle-aged - turned out to be not much different than a group of twenty-something rock stars-drunk on power and driven by sex, greed, and glamour."Testosterone Inc." goes behind the boardroom doors to show the serial affairs and marriages of these acquisitive corporate titans. At the center of this story is Jack Welch, the biggest of America's rock star CEOs and the former head of General Electric Co., surrounded by "mini-me" CEOs Ron Perelman of Revlon, Al Dunlap of Sunbeam, and Dennis Kozlowski of Tyco - all gone wild in public displays of consumption and predatory appetites writ large. Byron gets inside the bars where Welch liked to hang out and pick up women with his early "business soul mate" buddies. Byron hovers unseen at the elbow of Ron Perelman and his mistress aboard the Concorde for a week in Paris in his mistaken belief that his wife knows nothing about his secret affair.Byron peeks behind the curtains of a U.S. Army officers' quarters to behold Al Dunlap horrifying his first wife, who claimed in her divorce action that Dunlap would point his knife at her and say, "I often wondered what human flesh tasted like." Byron becomes a fly on the wall to chronicle the longing for respect and serial womanizing of Dennis Kozlowski. Frequently hilarious, sometimes heartbreaking, "Testosterone Inc." follows the intertwined lives of these four corporate heroes, from childhood to their ultimate moments of glory and the crash-and-burn calamities that followed, as man's age-old hunger for power, greed, and temptation undid them all. From suicide to murder, from dysfunctional childhoods to dysfunctional marriages in adulthood, from business chutzpah to financial suicide, here is the ultimate untold business story of our time: what went on at century's end, when testosterone got the best of businessmen everywhere, and CEOs went wild.

"...unputdownable...as gripping as any thriller...gasp in disbelief..." -- Reading Chronicle, September 2004

"Combine[s] an understanding of balance sheets with an ear for gossip and an eye for human failings." -- Daily Telegraph, 8 May 2004

An ageless story of men, power, greed, and sex

Testosterone Inc.: Tales of CEOs Gone Wild tells the story of a group of corporate titans?Jack Welch of GE, Dennis Kozlowski of Tyco, Ron Perelman of Revlon, and Al Dunlap of Sunbeam?during a time when all stock prices rose and all business leaders were heroes. With skill and wit, business writer and columnist Christopher Byron paints a vivid portrait of how these notable moguls became drunk on power and addicted to fame.

"Christopher Byron?s account is fun, bitchy and, when it is due, also admiring, of the woman who is responsible for stretching chintz across America."
The Economist magazine