Items related to Lost Books of the Bible For Dummies

Lost Books of the Bible For Dummies 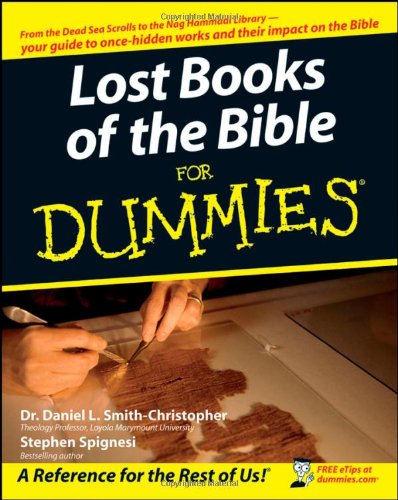 Lost Books of the Bible For Dummies is your one–stop guide to once–hidden works that add a new dimension to Biblical teachings. Most people have heard about the discovery of strange ancient religious writings that are not part the Hebrew Bible or the New Testament, such as the Gnostic Gospels. Now, you will find new insights and a fresh perspective on long–lost works that may have once been in the running for Biblical inclusion, but didn′t make the final cut. This easy–to–understand guide examines the sometimes weird, provocative, and profoundly moving texts that have been "lost" as well as those hotly debated works that are in some Bibles and not others. You will come away with a clearer understanding of the Judeo–Christian religion and the development of the Biblical canon. You’ll learn about the origins of the Bible, explore early scriptures, and understand why translations affect the meanings of texts. You’ll even learn how the Greek influenced early Biblical writing. Find out how to: Explain what the term “lost books” means Understand the definition of “canon” Take translation differences into consideration Divide early writings into style categories Take another look at scripture with the Dead Sea Scrolls See how the Greeks influenced early scripture Decode apocalyptic visions Complete with a list of ten of the weirdest Jewish lost books, ten of the weirdest Christian lost books, ten sayings of Jesus NOT in the Bible, and ten “lost books that every student of the Bible should read, Lost Books of the Bible For Dummies is your one–stop guide to understanding and reading the Biblical lost books.

Uncovers the mystery behind ancient Christian and Jewish writings Your complete resource for exploring the major lost books and the Judeo–Christian religion Are you intrigued by the discoveries of strange ancient religious writings that are not part of the Bible? This fun, friendly guide examines these largely unknown works, offering prominent scholars′ views on their meanings and importance. From the Book of Enoch to the Gnostic Gospels to the Gospel of Judas, you′ll understand the differences between the writings and their impact on religion. Discover: How the biblical canon developed The different categories of ancient religious writing Why these works are not in the Bible What the lost books teach us about God Sayings of Jesus not in the Bible

Dr. Daniel L. Smith–Christopher was recently named Undergraduate Theology Teacher of the Year by Augsburg Fortress Press. Stephen Spignesi is the author or coauthor of over 40 books, including Native American History For Dummies .

1. Lost Books of the Bible For Dummies

2. Lost Books of the Bible For Dummies