Items related to A Very Principled Boy: The Life of Duncan Lee, Red... 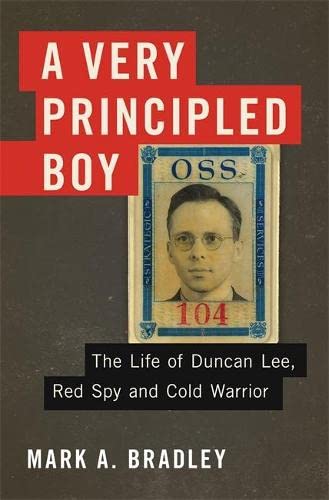 Duncan Chaplin Lee was a Rhodes Scholar, patriot, and descendent of one of America's most distinguished families,and possibly the best-placed mole ever to infiltrate U.S. intelligence operations. In A Very Principled Boy intelligence expert and former CIA officer Mark A. Bradley traces the tangled roots of Lee's betrayal and reveals his harrowing struggle to stay one step ahead of America's spy hunters during and after World War II.Exposed to leftist politics while studying at Oxford, Lee became a committed, albeit covert, member of the Communist Party. After following William Wild Bill" Donovan to the newly formed Office of Strategic Services, Lee rose quickly through the ranks of the U.S. intelligence service,and just as quickly gained value as a Communist spy. As one of the chief aides to the head of the OSS, Lee was uniquely well placed to pass sensitive information to his Soviet handlers, including the likely timeframe of the D-Day invasion and the names of OSS personnel under investigation for suspected communist affiliations.In 1945, one of Lee's former handlers confessed to the FBI and named Lee as a Soviet agent. For the next thirteen years, J. Edgar Hoover would tirelessly, but futilely, attempt to prove Lee's guilt. Despite being accused of treason in front of the House Un-American Activities Committee, the increasingly paranoid Lee miraculously escaped again and again. In a move to atone for what he had done, Lee later became a Cold Warrior in China, fighting Mao Zedong's communists. He died a free but conflicted man.In A Very Principled Boy , Bradley weaves a fast-paced cat-and-mouse tale of misguided idealism, high treason, and belated redemption. Drawing on Lee's letters and thousands of previously unreleased CIA, FBI, and State Department records, Bradley tells the unlikely story of a spy who chose his conscience over his country and its dark consequences.

Journal of Cold War Studies
"With A Very Principled Boy: The Life of Duncan Lee, Red Spy and Cold Warrior, Mark Bradley has provided a superb history... an exceedingly well-written, fully fleshed-out biography of Duncan Lee the man and spy that easily meets the most demanding standards of scholarly history."

Journal of American History
"Bradley skillfully navigates the complex workings of personalities, politics, ideology, and bureaucratic rivalries that make up the history of communist espionage and anticommunism. His book is a welcome contribution to our understanding of the emergence of Cold War politics out of the Grand Alliance of World War II." H-Diplo
"A valuable contribution to the intelligence literature on Soviet spies during World War II and what happened to them after they were discovered." Studies in Intelligence
"A Very Principled Boy explains Duncan Lee in the context of his time and closes the file on one of [William] Donovan's most trusted officers. It is a major contribution to counterintelligence literature, with lessons for all intelligence officers."

Russian Life
"Lee's story is by now a common one - of the idealistic youth who becomes radicalized then blindly serves a power that has little regard or relation to his ideals. Bradley's tale (fluidly told and meticulously documented) is of how this Yale and Oxford educated son of missionaries first justified his personal treachery, then regretted it, and how it destroyed his life and those around him.... But it is also a larger tale of the vast scope of Soviet espionage operations in the US, of Hoover and the FBI's dogged counterespionage efforts, of what happens when conscience and country collide." Washington Lawyer
"One of the very best espionage books in years.... [Bradley] performs a masterful job of exploring the tangled and confusing life of Lee.... Classify this as a five-cloak, five dagger read." UVA Lawyer
"[Bradley's] work reveals the dark intricacy of Soviet espionage inside the U.S. from the 1930s through the 1950s. The result is the fascinating tale of a traitor who chose his conscience over his country." W & L Alumni Magazine
"A fast-paced, cat-and-mouse tale of misguided idealism and treason, the book draws on previously unreleased CIA and State Department records to reveal this riveting story."

Christopher Andrew, author of Defend the Realm: The Authorized History of MI5
"Mark Bradley's riveting biography of Duncan Chaplin Lee fills a major gap in both Russian and American intelligence history. Like Alger Hiss, Duncan Chaplin Lee persuasively claimed after the Second World War that accusations that he had been a Soviet spy were a McCarthyite invention. In reality, as Bradley demonstrates, Lee had been a committed Russian agent at the heart of wartime US intelligence. The 'Very Principled Boy' became a master of the black art of deception--so much so that he deceived even himself." David Garrow, author of the Pulitzer Prize-winning Bearing the Cross
"Bradley's deeply researched and authoritative biography offers a powerful and emotionally compelling account of how one man's life illuminates the dramatic story of widespread Soviet espionage by Americans against the United States during World War II."

Seattle Times
"What makes the story fascinating is not so much what Lee did - there aren't many details of what secrets he stole - as what his government did and didn't do about him, and why.... Much of the value in Bradley's book about Lee is in telling the military and political story of the 1940s, showing how the abrupt changes in the political climate played out in the life of a lonely man who chose a course he came to regret. Bradley is neither a conservative out to make Franklin Roosevelt look soft on Stalin, nor a liberal who would limit the story of communists in government to 'witch hunts.' He is a professional telling the story of infamous breach in intelligence, and in A Very Principled Boy, he tells it well." Washington Times
"One of the best espionage books to cross this desk in years.... A five-cloak, five dagger read." Weekly Standard
"Duncan Lee's improbable story is well-told in this new biography by Mark A. Bradley, a former CIA officer, who has diligently mined the many new sources on Soviet espionage that have become available in the past two decades.... While some parts of Lee's story remain a mystery (since he never acknowledge or explained his espionage), Bradley has provided a fascinating account of one man's treachery and the toll it took."

Winner of the George Pendleton Prize Wall Street Journal
"In A Very Principled Boy, Mark Bradley tells Lee's story with few frills or atmospherics, letting the remarkable facts speak for themselves. Mr. Bradley is a former CIA intelligence officer whose straightforward narrative refuses to sensationalize. For this and other reasons, it radiates authenticity.... [A] fascinating narrative." Washington Post
"In his swift, absorbing and damning book A Very Principled Boy, Mark A. Bradley, a former CIA officer and a lawyer in the Justice Department's National Security Division, brings the gavel down on Lee's guilt and explains how he eluded prosecution. Bradley combines a lawyerly ability to build his case with a gift for storytelling to make the life of this cautious, smaller-than-life character more than the footnote it was." Foreign Affairs
"Bradley has produced a truly superb example of this genre, especially because he exposes in riveting fashion how the Soviet spy network worked and how it flummoxed the FBI, which was very slow to catch on."

Library Journal, starred review
"[Bradley] tells the fascinating story of this complicated spy's life.... Bradley provides extensive background information regarding the events of the time and all the characters involved, painting a vivid picture of the world in which Lee operated. Readers interested in Cold War history or real-life spy dramas will enjoy this thoroughly researched and highly readable work." Kirkus
"An obscure wartime spy working for the OSS, the wartime precursor to the CIA, gets a thorough exposé by a government lawyer and former CIA officer." Randall B. Woods, author of Shadow Warrior: William Egan Colby and the CIA
"A vivid portrait of one of the early Cold War's most important but least studied Soviet moles. Bradley does an excellent job plumbing the depths of Duncan Lee's ideological defection." Book Description:

From an award-winning scholar and CIA insider, the thrilling, untold story of one of Stalin's highest-ranking moles in the U.S. intelligence services.

7. A VERY PRINCIPLED BOY: THE LIFE