Items related to Europe: The Struggle for Supremacy, from 1453 to the...

Simms, Brendan Europe: The Struggle for Supremacy, from 1453 to the Present 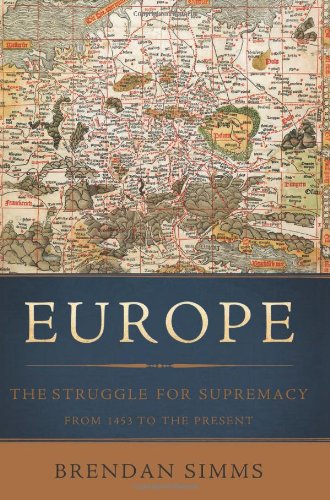 If there is a fundamental truth of geopolitics, it is this: whoever controls the core of Europe controls the entire continent, and whoever controls all of Europe can dominate the world. Over the past five centuries, a rotating cast of kings and conquerors, presidents and dictators have set their sights on the European heartland, desperate to seize this pivotal area or at least prevent it from falling into the wrong hands. From Charles V and Napoleon to Bismarck and Cromwell, from Hitler and Stalin to Roosevelt and Gorbachev, nearly all the key power players of modern history have staked their titanic visions on this vital swath of land.

In Europe, prizewinning historian Brendan Simms presents an authoritative account of the past half-millennium of European history, demonstrating how the battle for mastery there has shaped the modern world. Beginning in 1453, when the collapse of the Byzantine Empire laid Europe open to Ottoman incursion and prompted the dramatic expansion of the Holy Roman Empire, Simms leads readers through the epic struggle for the heart of Europe. Stretching from the Low Countries through Germany and into the North Italian plain, this relatively compact zone has historically been the richest and most productive on earth. For hundreds of years, its crucial strategic importance stoked a seemingly unending series of conflicts, from the English Civil War to the French Revolution to the appalling world wars of the 20th century. But when Europe is in harmony, Simms shows, the entire world benefits—a lesson that current leaders would do well to remember.

A bold and compelling work by a renowned scholar, Europe integrates religion, politics, military strategy, and international relations to show how history—and Western civilization itself—was forged in the crucible of Europe.

Brendan Simms is a fellow at Peterhouse College, Cambridge, professor in the History of European International Relations, and Director of the Centre of International Studies, University of Cambridge. The author of five books, including Three Victories and a Defeat and Unfinest Hour, which was short-listed for the Samuel Johnson Prize, he lives in Cambridge, England.

BBC History Magazine
Brilliantly successful .Simms has the breadth of knowledge and clarity of vision to make his case compelling. His book is also immensely entertaining as well as instructive. There are few pages not enlivened by sharp insight, telling vignette or memorable turn of phrase. In short, this is a great book and everyone interested in European history will want to read it.”

The Washington Times
[A] sweeping, intelligent and enormously ambitious book.”

Paul Kennedy, J. Richardson Dilworth Professor of History, Yale University, and author of The Rise and Fall of the Great Powers
Europe is a superb, sure-footed analysis of how this center of world civilization, technology, and warfare evolved since the fall of Constantinople in 1453. It is unabashedly political history, and the better for being so. Simms's acumen and sharp opinions are a joy to read. This book will be appreciated both by the general reader and by history teachers everywhere.”

Wall Street Journal
Prodigious .If postmodern scholarship has Ranke spinning in his grave, Mr. Simms's book will give his weary soul some rest . This is the history of Richelieu, Metternich and Kissinger, not of Luther, Newton and Beethoven. Such a summary may sound arid, but Europe is anything but. In fact, it draws the reader forward with its grand epic of shifting alliances, clashing armies and ambitious statecraft. Simms is a skilled writer with a rare gift for compressed analysis. His focus on the military and diplomatic arc of European history lends his book a strong narrative line and thematic coherence. Patterns emerge that might have remained buried in a more various survey.”

Economist, Favorite Book of the Year
An original take on Europe's history that shows that German power was a concern long before the country formally came into being in the late 19th century, and perhaps as far back as the mid-1400s. A compelling and provocative thesis that has lessons for politicians today.”

The Economist
Brendan Simms's new history [is] especially timely. He has, in effect, dropped a big stone into the European pond and stood back to watch the ripples spread . It is a compelling and provocative thesis . This is sweeping history, told with verve and panache, and it is all the more refreshing for that.”

Financial Times
Europe is a stimulating, impressive history that starts with the Ottoman conquest of Constantinople in 1453 and extends to the present day .An excellent read and its insights into the grand themes of European history are penetrating and lucidly argued.”

The Telegraph
"Brendan Simms is a historian of unusual range and ability.... His new book is nothing less than a history of Europe over the past 550 years.... Writing such a book is a colossally demanding task the sort of challenge most sane historians would baulk at, unless they had a very clear idea of what they wanted to say. Luckily, knowing what he wants to say is one of Simms's strengths. For this book is driven by two great master-ideas, and there is hardly a page in it where their presence is not felt. So, no matter how dense the details may be of kings, wars, treaties and governments, the reader always has the exhilarating sense of moving swiftly onwards.... Like all truly powerful and original works, this is a book worth disagreeing with. But above all it is a book worth reading."

The New Statesman
"[An] unrepentantly old-fashioned, lively and erudite history of Europe since 1453.... Ambitious in scope... Simms knows what he is talking about."

The Weekly Standard
"Sweeping and provocative."

Timothy Snyder, author of Bloodlands
World history is German history, and German history is world history.
This is the powerful case made by this gifted historian of Europe, whose expansive erudition revives the proud tradition of the history of geopolitics, and whose immanent moral sensibility reminds us that human choices made in Berlin (and London) today about the future of Europe might be decisive for the future of the world.”

Norman Davies, St. Antony's College, Oxford and Jagiellonian University, Krakow
European history comes in many guises, but Brendan Simms's strategic and geopolitical approach provides a strong and lucid framework within which everything else fits into place. His emphasis on the centrality of Germany offsets more western-orientated accounts while also giving due prominence to Eastern Europe. Covering the whole of the modern period, this book is more than an excellent introduction; it's a major interpretational achievement.”

Europe: The Struggle for Supremacy, from 1453 to the Present Simms, Brendan