Items related to A Scandalous Countess: A Novel of the Malloren World

Beverley, Jo A Scandalous Countess: A Novel of the Malloren World

A Scandalous Countess: A Novel of the Malloren World 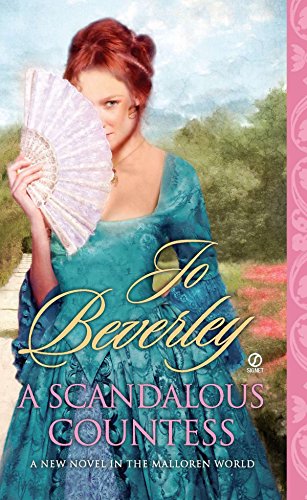 Lady May is back. And so is the scandal that sent her tumbling from her position as the toast of London, when her husband, the Earl of Maybury, was killed in a duel. Even a year of mourning hasn't quieted the rumors of her infidelity.

Georgia Maybury is determined to regain her position in the beau monde, but a scarred ex-naval officer threatens her plans...

Jo Beverley was the New York Times bestselling author of the Rogue series and numerous other romance novels. Widely regarded as one of the most talented romance writers today, she was a five-time winner of Romance Writers of America's cherished RITA Award and one of only a handful of members of the RWA Hall of Fame. She also twice received the Romantic Times Career Achievement Award. She had two grown sons and lived with her husband in England. Jo Beverley passed away in May 2016.

4. A Scandalous Countess: A Novel of the Malloren World

7. A SCANDALOUS COUNTESS: A NOVEL O

8. A SCANDALOUS COUNTESS: A NOVEL O

9. A SCANDALOUS COUNTESS: A NOVEL O