Items related to My Gun is Quick

Spillane Mickey My Gun is Quick

My Gun is Quick 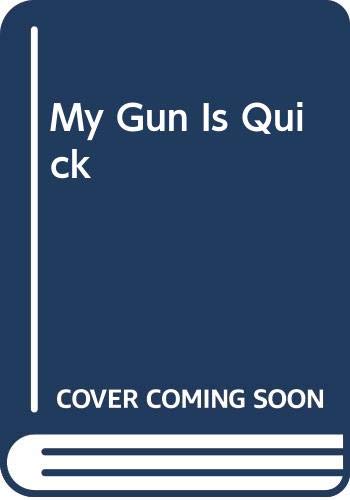 Before Jack Reacher . . . there was Mike Hammer

PI Mike Hammer runs into a red-headed prostitute in a bar. He's not interested in her professional services, so he buys her a coffee and chats to her for a while. Tired, drained, he just wants someone to talk to, and she's a willing listener. He's just got paid, and in a fit of generosity he offers her enough money to buy some decent clothes and get a regular job.

No big deal, except that the next day the streetwalker turns up dead. It's none of Hammer's business, but all the injustice of the world is suddenly crystallised in this one senseless death. And then Hammer begins to realise that the death, supposedly a hit-and-run accident, doesn't add up. It's starting to look like murder.

But it doesn't stop there. The trail leads Hammer into a world of vice, corruption and violence . . .

'[Spillane] was a quintessential Cold War writer, an unconditional believer in good and evil' Washington Times.

Born Frank Morrison Spillane in Brooklyn, New York City, Mickey Spillane started writing while at high school. During the Second World War, he enlisted in the Army Air Corps and became a fighter pilot and instructor. After the war, he moved to South Carolina. He was married three times, the third time to Jane Rogers Johnson, and had four children and two stepchildren. He wrote his first novel, I, the Jury (1947), in order to raise the money to buy a house for himself and his first wife, Mary Ann Pearce. The novel sold six and a half million copies in the United States, and introduced Spillane's most famous character, the hardboiled PI Mike Hammer. The many novels that followed became instant bestsellers, until in 1980 the US all-time fiction bestseller list of fifteen titles boasted seven by Mickey Spillane. More than 225 million copies of his books have sold internationally. He was uniformly disliked by critics, owing to the high content of sex and violence in his books. However, he was later praised by American mystery writers Max Alan Collins and William L. DeAndrea, as well as artist Markus Lüpertz. The novelist Ayn Rand, a friend of Spillane's, appreciated the black-and-white morality of his books. Spillane was an active Jehovah's Witness. He died in 2006.

Book Description Penguin Publishing Group. Mass Market Paperback. Condition: Good. A copy that has been read, but remains in clean condition. All pages are intact, and the cover is intact. The spine may show signs of wear. Pages can include limited notes and highlighting, and the copy can include previous owner inscriptions. At ThriftBooks, our motto is: Read More, Spend Less. Seller Inventory # G0451097912I3N00