Items related to The Trikon Deception 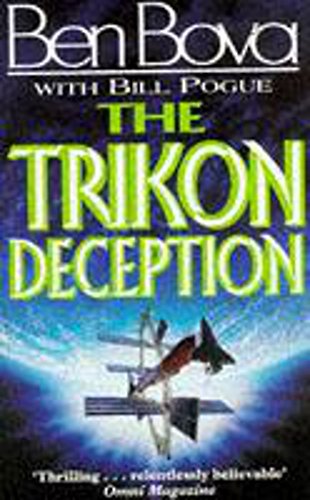 Writing with the astronaut Bill Pogue, Ben bova has created a breathtakingly believable thriller set in the near future in space...

Earth has become an ecological nightmare. Overhead, on a vast metallic island in space, the scientists of the Trikon project undertake research too risky to be conducted anywhere else - research which could save the planet.

Then Commander Dan Tighe discovers the truth. Trikon's new priority is espionage. The scientists - consumed by greed, lust and drugs - are running the lab for their own gain. And one of the crew is trying to destroy the whole station...

In a lab constructed in space, the scientists of the Trikon project undertake research that could save the otherwise doomed planet Earth. But, consumed by greed, they are running the lab for their own gain. Only Commander Tighe can save the Trikon station - only Trikon can save the Earth.

Buy Used
Condition: Very Good
MAY OR MAY NOT HAVE A DUST JACKET... Learn more about this copy

Book Description Hodder Paperbacks, 1994. Paperback. Condition: Very Good. MAY OR MAY NOT HAVE A DUST JACKET Very Good condition with no significant faults. Clearly used but very few minor defects. Will look good on your book case after reading but may not be suitable as a present unless hard to find elsewhere MOST IMAGES ARE STOCK PHOTOS. IF YOU NEED A PARTICULAR EDITION PLEASE SEND US A MESSAGE BEFORE PURCHASING SO THAT WE CAN CHECK THAT THE ONE ON OFFER IS THE ONE YOU REQUIRE. SECURE DAILY POSTING FROM UK. 30 DAY GUARANTEE. Seller Inventory # mon0002320839

Book Description Hodder Paperbacks, 1994. Paperback. Condition: Used; Good. Dispatched, from the UK, within 48 hours of ordering. This book is in good condition but will show signs of previous ownership. Please expect some creasing to the spine and/or minor damage to the cover. Damaged cover. The cover of is slightly damaged for instance a torn or bent corner. Aged book. Tanned pages and age spots, however, this will not interfere with reading. Seller Inventory # CHL4509592

Book Description Hodder Paperbacks 07/07/1994, 1994. Condition: Very Good. Shipped within 24 hours from our UK warehouse. Clean, undamaged book with no damage to pages and minimal wear to the cover. Spine still tight, in very good condition. Remember if you are not happy, you are covered by our 100% money back guarantee. Seller Inventory # 6545-9780450588822

Book Description New English Library Ltd, 1994. Condition: Good. Ships from the UK. Former Library book. Shows some signs of wear, and may have some markings on the inside. Seller Inventory # GRP23664455

Book Description Hodder Paperbacks 07/07/1994, 1994. Condition: Very Good. This book is in very good condition and will be shipped within 24 hours of ordering. The cover may have some limited signs of wear but the pages are clean, intact and the spine remains undamaged. This book has clearly been well maintained and looked after thus far. Money back guarantee if you are not satisfied. See all our books here, order more than 1 book and get discounted shipping. . Seller Inventory # 7719-9780450588822

Book Description Hodder Paperbacks 07/07/1994, 1994. Condition: Good. Will be shipped promptly from UK warehouse. Book is in good condition with no missing pages, no damage or soiling and tight spine. There may be some dog-eared pages showing previous use but overall a great book. Seller Inventory # 9053-9780450588822

Book Description Hodder Paperbacks, 1994. Paperback. Condition: Used; Good. We are committed to providing each customer with the highest standard of customer service. All books are picked, packed and dispatched from the United Kingdom. Seller Inventory # FH1378749