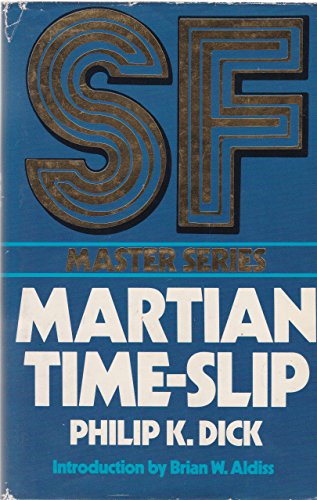 On the arid colony of Mars the only thing more precious than water may be a ten-year-old schizophrenic boy named Manfred Steiner. For although the UN has slated "anomalous" children for deportation and destruction, other people--especially Supreme Goodmember Arnie Kott of the Water Worker's union--suspect that Manfred's disorder  may be a window into the future. In Martian Time-Slip Philip K. Dick uses power politics and extraterrestrial real estate scams, adultery, and murder to penetrate the mysteries of being and time.
From the Trade Paperback edition.

One of the stand-out novels in Philip K. Dick's career of wildly reality-bending SF, Martian Time- Slip (1964) convinces by placing its insanities in a quiet, even domestic context. Here colonised Mars has a flavour of grubby, struggling 1950s suburbia, where money (not to mention water) is in short supply, jobs are insecure, the humour's mostly black, and small tragedies like one minor character's suicide cause far-ranging ripples. The good old human comedy of lies, power-play, real-estate deals and extramarital naughtiness continues as ever--all distorted by the real SF factor, an autistic child's dislocated sense of time. In one memorable scene he sketches the glorious new Martian housing project just being planned ... but as it will look a century later, a decayed slum. So powerful are this boy's visions of nightmare futures that they suck in other people and infect them with sick images of the "gubbish worm", an appalling symbol of entropy. Gubbish devours beauty and reduces language itself to meaningless gubble-gubble. The very human and occasionally even likeable villain Arnie Kott plans to exploit this time-twisting ability, whereupon things become very tangled indeed. Another worthy reissue in the Millennium SF Masterworks series, which has yet to pick a single dud. --David Langford

Philip K. Dick is the bestselling author of MINORITY REPORT and BLADE RUNNER

Book Description Hardcover. First UK Edition / First Printing. First UK Edition / First Printing. Hardcover. First UK edition and also the first hardcover edition of this novel originally published as a paperback original by Ballantine in 1964. This hardcover edition is part of the SF MASTER SERIES, edited by Brian Aldiss and Harry Harrison. Includes an introduction by Aldiss. One of Dick's stronger works, included in Pringle's SCIENCE FICTION: THE 100 BEST NOVELS (#43). Levack 25f. PLEASE NOTE that all our First Editions are also First Printings, unless we specifically note otherwise. All our dust jackets are protected in clear mylar covers. Minor toning and light foxing to page edges, else fine in near fine dust jacket with short closed tear on rear panel and some minor edgewear. Overall, an attractive copy. Seller Inventory # 50587

Book Description Hardcover. Condition: Good. No Jacket. Item is in good condition. Some moderate creases and wear. This item may not come with CDs or additional parts including access codes for textbooks. This may not have a dust jacket. Might be an ex-library copy and contain writing/highlighting. Photos are stock pictures and not of the actual item. Seller Inventory # DS-0450029786-3