Items related to Hero of Our Time (Mentor books)

Hero of Our Time (Mentor books) 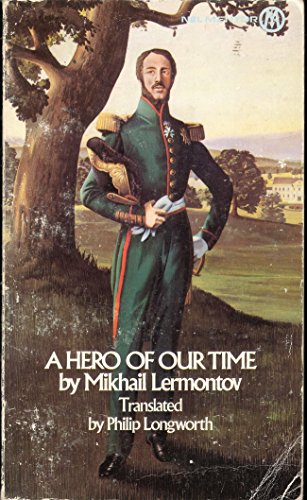 A Hero of Our Time is an example of the superfluous man novel, noted for its compelling hero Pechorin and for the beautiful descriptions of the Caucasus.

"It's high time an up-to-date and idiomatic version of A Hero of Our Time was made available to American readers. Marion Schwartz's translation of Lermontov's classic adventure novel captures all the suppleness and wit of Lermontov's prose, the fine texture of his descriptions and the galloping rhythm of his narrative passages. This is a fine addition to the Modern Library." -- Michael Scammell
Military life in the Caucasus, bandits, duels, romance--at the hands of a passionate adventurer with "a restless imagination, an insatiable heart. That is Pechorin, and also Lermontov. If you have a personal all-time bestseller list, make room for A Hero of our Time. -- Alan Furst
"In Russia Mikhail Lermontov is considered one of the greatest writers of the nineteenth century. Marian Schwarz's compelling translation shows us why." -- Peter Constantine"

"[A] smart, spirited new translation."
-The Boston Globe "One of the most vivid and persuasive portraits of the male ego ever put down on paper."
-Neil LaBute, from the Foreword From the Author:

When this novel appeared in Russia in 1840 there was shock, there was horror. It was a slander and a libel and a slur on the younger generation. This often happens when a novel or play touches to the quick, but we do have to admit to our appetite for shock and horror. The equivalent in our time was The Angry Young Men, and while the fuss and noise was largely the creation of the Media, nevertheless it all went on for about ten years, and that couldn’t have happened if people hadn’t wanted to be shocked. There were actually reports of fathers trying to horsewhip their daughters’ impudent suitors. Splendidly anaphronistic stuff.
The emotions A Hero of Our Time evoked went rather deeper. Lermontov, unpleasantly attacked, said the book was indeed a portrait, not of himself, but of a generation. He was far from apologetic and spoke out of that sense of responsibility and authority then possessed by Russian writers. They saw themselves, and were generally regarded, as a public conscience. The writers of no other country have ever enjoyed this role.
So when Lermontov said he had diagnosed the illness but it was not his business to prescribe the cure, he disappointed.

1. Hero of Our Time (Mentor books)

2. Hero of Our Time (Mentor books)

Book Description New English Library Ltd, 1975. Paperback. Condition: Good. All orders are dispatched the following working day from our UK warehouse. Established in 2004, we have over 500,000 books in stock. No quibble refund if not completely satisfied. Seller Inventory # mon0004711506

3. Hero of Our Time (Mentor books)

Book Description New English Library Ltd, 1975. Condition: Fair. This is an ex-library book and may have the usual library/used-book markings inside.This book has soft covers. With usual stamps and markings, In fair condition, suitable as a study copy. Seller Inventory # 6278196

4. Hero of Our Time (Mentor books)