Items related to The Fountains of Paradise

The Fountains of Paradise 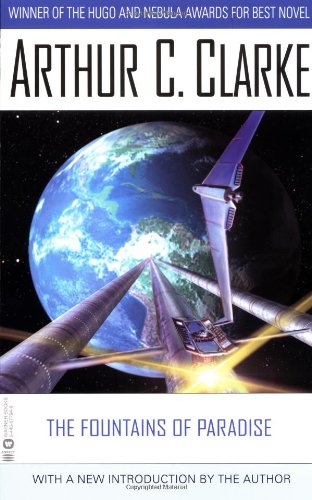 The lives of Van Morgan, an adventurous engineer of the twenty-second century, and Kalidasa, an obsessive tyrant of the second century, are brought together in a drama that takes place on an alluring island in the Indian Ocean, in a new editin of the Hugo and Nebula Award-winning classic. Reprint.

Originally The Fountains of Paradise was intended to be Arthur C. Clarke's last novel, before the author came out of "retirement" to pen 2010: Odyssey Two. It is also one of his best, and being set in a fictionalised version of Clarke's adopted home of Sri Lanka, one of his most personal. The story is based around the fantastical yet scientifically supportable idea of a "Space Elevator", a "tower" from the earth to geo-stationary orbit, 23 000 miles "high". The purpose is to make access to space routine, safe and cheap, and the 22nd century-set novel essentially follows Vannevar Morgan in his quest to complete this monumental project.

There are grand set-pieces worthy of the best adventure story, a generous scattering of fascinating speculations and observations and, of course, Clarke's famous eye for the epic vistas inherent in large-scale science fiction:

Slowly his eyes adapted, and in the depths of the mirror a faint red glow began to burn, and spread, and consume the stars. It grew brighter and brighter and flowed beyond the limits of the mirror; now he could see directly, for it extended halfway down the sky. A cage of light, with flickering, moving bars, was descending upon the earth.

As much the novel of a poet as that of a scientist, The Fountains of Paradise makes striking use of the sometimes haunting history of Sri Lanka, a device echoed by Kathleen Ann Goonan in her Hawaiian set novel, The Bones of Time. Anyone seriously interested in great science fiction should really have both these books in their collection. --Gary S. Dalkin Book Description:

One of Clarke's most famous and acclaimed novels, winner of both the Hugo Award and the Nebula Award

1. The Fountains of Paradise

2. The Fountains of Paradise

3. The Fountains of Paradise

4. The Fountains of Paradise