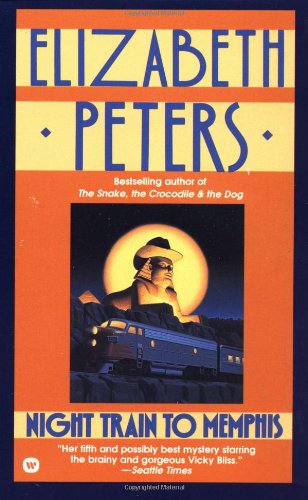 What happens when you mix authentic Egyptian lore, a ripping good yarn, and a heroine with an affinity for crime - and for dangerous, seductive men? You get a new Vicky Bliss mystery by the award-winning author of The Snake, the Crocodile, and the Dog. Writing here as Elizabeth Peters, but featuring the delicious romantic tension of the bestselling novels she writes under her pseudonym Barbara Michaels, Peters as always brings readers a masterful mystery resplendent with wit and rousing adventure. Vicky Bliss, assistant curator of the National Museum in Munich, doesn't know a thing about Egyptology. It's her familiarity with larceny that brings an intelligence agency to her office with an offer she can't refuse. They want her as an operative on a luxury Nile cruise because "certain information" has come to their attention - on a dead body - that a major heist of Egyptian antiquities is in the works. Will Vicky risk her life and all 5'11" of her shapely body in order to stop the thief? Vicky suspects that the man the authorities want is her occasional lover and frequent adversary, the art thief and master of disguise she knows only by one of his many aliases - "Sir John Smythe." On the first day of the trip, in the shadow of the Sphinx, she does spot him - with a beautiful young girl clinging to his arm. Stunned and furious, Vicky is too pre-occupied with her own feelings to concentrate on crime as the cruise ship sails up the Nile. Of course, she's also distracted by a billionaire offering romance, a gorgeous "sheik" suggesting some very private tours, a pompous Boston professor flattering her ego, and a glamorous American widow giving her beauty tips. But when another distraction showsup, in the person of her lovable and exasperating boss Herr Dr. Schmidt, and one of the crew is brutally murdered, Vicky realizes that this dream cruise is turning into a nightmare voyage and that everything she cherishes is threatened by perils even worse than death.

The well woven plot and exotic atmosphere couldn't be much better - it will delight her fans. (Library Journal)

Frustrated love, stolen antiquities and murder on the Nile, in the fifth Vicky Bliss mystery from the bestselling Elizabeth Peters.

Book Description Condition: New. An assistant curator of Munich's National Museum, Vicky Bliss is no expert on Egypt, but she does have a Ph.D. in solving crimes. So when an intelligence agency offers her a luxury Nile cruise if she'll help solve a murder and stop a heist of Egyptian antiquities, all 5'11" of her takes the plunge. Vicky suspects the authorities really want her to lead them to her missing lover, the art thief and master of disguises she knows only as "Sir John Smythe." And right in the shadow of the Sphinx she spots him. . . with his new flame. Vicky is so furious at this romantic stab-in-the-back, not to mention the sudden arrival of her meddling boss, Herr Dr. Schmidt, that she may overlook a danger as old as the pharaohs and as unchanging. . . a criminal who hides behind a mask of charm while moving in for the kill. Seller Inventory # 9780446602488