Items related to The Innocent 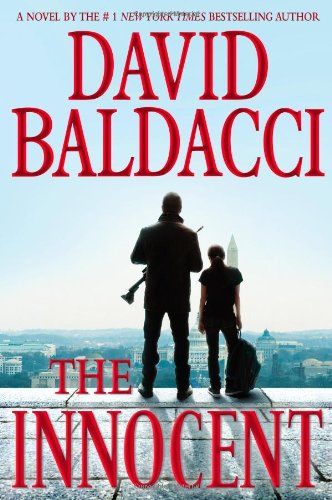 America has enemies--ruthless people that the police, the FBI, even the military can't stop. That's when the U.S. government calls on Will Robie, a stone cold hitman who never questions orders and always nails his target.
But Will Robie may have just made the first--and last--mistake of his career . . .
THE INNOCENT
It begins with a hit gone wrong. Robie is dispatched to eliminate a target unusually close to home in Washington, D.C. But something about this mission doesn't seem right to Robie, and he does the unthinkable. He refuses to kill. Now, Robie becomes a target himself and must escape from his own people.
Fleeing the scene, Robie crosses paths with a wayward teenage girl, a fourteen-year-old runaway from a foster home. But she isn't an ordinary runaway-her parents were murdered, and her own life is in danger. Against all of his professional habits, Robie rescues her and finds he can't walk away. He needs to help her.
Even worse, the more Robie learns about the girl, the more he's convinced she is at the center of a vast cover-up, one that may explain her parents' deaths and stretch to unimaginable levels of power.
Now, Robie may have to step out of the shadows in order to save this girl's life . . . and perhaps his own.

"[A] spectacular entry into the hardcore action-adventure world...a tour de force of storytelling power and grace. Baldacci at his best, which is as good as it gets."-- Providence Sunday Journal

"This is another great novel by a brilliant writer. Baldacci catches you from the very first page and grabs your attention until the last word. Read it."-- Lincoln Journal Star (NE)

"Another action tale of espionage and betrayal from a master storyteller. Baldacci brings his unusual, distinctive skill in character development to portray people who seem very real, with a degree of unpredictability that advances this very clever plot."-- The Free-Lance Star

"This book is a definite one-day, 'edge-of-your-chair' read, with an ending that is a complete surprise. One of the best Baldaccis since Absolute Power, this is one that will have all suspense readers enthralled."-- Suspense Magazine

"The Innocent is....all-American, all-heart... a maze of bread-crumb clues keeping you riveted to the page as each precious minute ticks toward its deadly ultimatum ....His talent for weaving so many disparate and delicate strands into a perilous web of deception is masterful, resulting in a remarkable, intellectually satiating experience."-- Everyday eBook

"The Innocent is Baldacci at his absolute best...Baldacci provides the reader a non-stop pulse pounding ride that will keep you on the edge of your seat into the wee hours of the morning...Five Stars."--Examiner.com

"David Baldacci is still at the top of his game...He is a meticulous writer who blasts his plot into a million pieces yet is able to pull it back together before the final page is turned. [He] continutes to impress."-- The Huffington Post

"The spine-chilling action begins on the first page and doesn't let up until the last...The Innocent is not just a scary read; this is heart-stopping stuff!"--BookReporter.com

"Forget Fifty Shades of Grey--the page-turner of the season is The Innocent by David Baldacci...The reader wants for nothing: there are car chases and shootouts, snipers and moles, safe houses and digestible bio-transmitters...The tale starts at a blistering rate and accelerates through 100 short action-packed chapters...this is Baldacci back at his best."-- The Times (London)

1. The Innocent (Will Robie Series)

3. The Innocent (Will Robie Series)

Book Description Grand Central Publishing, 2012. Hardcover. Condition: New. Excellent condition. Interior is tight, bright and clean; no underlining, notes or highlighting. Hard covers are tight and stiff. Complete with original and sticker free paper dust cover. Minor scuffing and/or wrinkles on the paper dust cover. 100% Satisfaction Guaranteed. All items are carefully enclosed with bubble wrap. We ship promptly and worldwide via US Post and will email you a tracking number. Seller Inventory # SKU0053496

4. The Innocent (Will Robie Series)

5. The Innocent (Will Robie Series)

6. THE INNOCENT (WILL ROBIE SERIES)