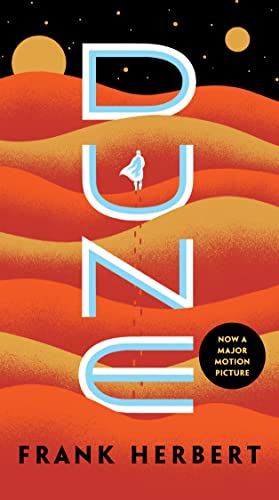 In 1965, after being rejected by more than a dozen publishing houses, a book called "Dune" was brought out by the Chilton Book Company. Its respected author, journalist Frank Herbert, had written "Dune" with nothing more in mind than to entertain his readers with the telling of a particularly complex story, one which had occupied his thoughts for more than six years. No one - not Herbert, not Chilton, not the science fiction community at the time - had any idea that "Dune" would be adopted and read by successive generations with a fervor bordering on cult worship. Or that it would prove to be merely the first of what have now become five international bestsellers about a desert world of the future - the planet Arrakis, called Dune.

Originally serialised in Analog during the early 1960s, Dune has sold over 10 million copies, becoming the most successful science fiction novel ever and giving rising to five sequels and a prequel, Prelude to Dune: House Atreides. With Lord of the Rings, 1984 and Catch 22, it is, regardless of whether one normally reads science fiction, a defining novel of the 20th century. Author Frank Herbert always preferred the original magazine illustrations by Hugo Award-winning artist John Schoenherr to those of other artists, and this illustrated edition features 12 colour plates by Schoenherr together with an evocative dust-jacket painting.

Dune is epic space opera, a saga of dynastic rivalry rooted in history and ecology, the story of the planet Arrakis 10 000 years from now, and of the conflicts over possession of Melange, a psycho-mutagenic "spice" vital to maintaining the galactic Imperium. It is the story of Paul Atreides, the man who would become Dune Messiah, and of the giant sand worms which haunt the desert landscapes. More elaborate and complex than preceding SF, Frank Herbert laid the foundations that made Star Wars and Babylon 5 possible. Dan Simmon's Hyperion and David Zindell's Neverness launched even richer, more dazzling and thrilling galactic epics, but Dune retains its premiere place in the collective imagination. Decades after initial publication it is still the benchmark for popular SF, a book everyone should read, if only to know what everyone else is talking about. --Gary S Dalkin

"I know nothing comparable to it except The Lord of the Rings."--Arthur C. Clarke "It is possible that Dune is even more relevant now than when it was first published."--The New Yorker "An astonishing science fiction phenomenon."--The Washington Post "One of the monuments of modern science fiction."--Chicago Tribune "Powerful, convincing, and most ingenious."--Robert A. Heinlein "Herbert's creation of this universe, with its intricate development and analysis of ecology, religion, politics and philosophy, remains one of the supreme and seminal achievements in science fiction."--Louisville Times