Items related to One Shot: A Reacher Novel (Jack Reacher) 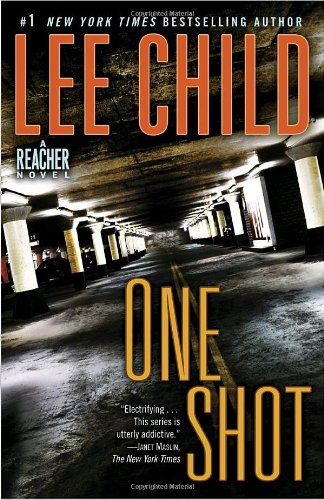 Six shots. Five dead. One heartland city thrown into a state of terror. But within hours the cops have it solved: a slam-dunk case. Except for one thing. The accused man says: You got the wrong guy. Then he says: Get Reacher for me.

And sure enough, ex–military investigator Jack Reacher is coming. He knows this shooter—a trained military sniper who never should have missed a shot. Reacher is certain something is not right—and soon the slam-dunk case explodes.

Now Reacher is teamed with a beautiful young defense lawyer, moving closer to the unseen enemy who is pulling the strings. Reacher knows that no two opponents are created equal. This one has come to the heartland from his own kind of hell. And Reacher knows that the only way to take him down is to match his ruthlessness and cunning—and then beat him shot for shot.

Lee Child's Jack Reacher thrillers always have remarkably inventive setups, and One Shot is true to form. A sniper, Barr, kills five people with six shots and leaves a clear trail of evidence; arrested, he asks for Reacher. When Reacher was a military policeman, politics stopped him pursuing Barr--he cannot understand why Barr would ask for him and Barr has been beaten in jail until he cannot remember himself. Yet, for Reacher, the loner who looks at things differently from civilians, the story does not add up--Barr should not have got himself caught, should not even have fired from where he did.

Child is a master of the perverse solution to the set of questions no-one ever asked in quite that way before, and the macho yet sensitive Reacher is one of the more interesting series characters in thrillers. One Shot is a smart set of puzzles which strings the reader along to false conclusions and a sense of real danger. It also, like its hero, has a heart. --Roz Kaveney

"Child's strengths are fast-moving dialogue and gripping action sequences ... The excitement lasts from the first to the final page" (Evening Standard)

"The Jack Reacher series of thrillers...are all hugely exciting, and knowledgeable about weapons and technology. They exude a powerful sense of right and wrong ... We've seen him as a right of wrongs and always as God's gift to women" (Literary Review)