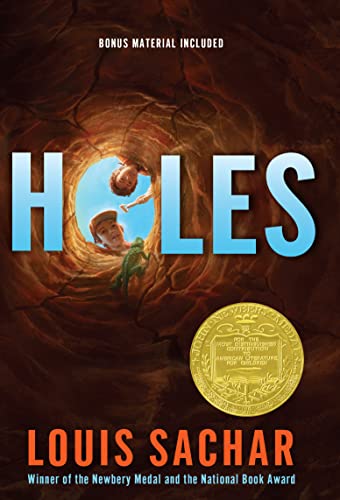 Winner of the Newbery Medal and the National Book Award! This #1 New York Times bestselling, modern classic in which boys are forced to dig holes day in and day out is now available with a splashy new look.

Stanley Yelnats is under a curse. A curse that began with his no-good-dirty-rotten-pig-stealing-great-great-grandfather and has since followed generations of Yelnatses. Now Stanley has been unjustly sent to a boys' detention center, Camp Green Lake, where the boys build character by spending all day, every day digging holes exactly five feet wide and five feet deep. There is no lake at Camp Green Lake. But there are an awful lot of holes.

It doesn't take long for Stanley to realize there's more than character improvement going on at Camp Green Lake. The boys are digging holes because the warden is looking for something. But what could be buried under a dried-up lake? Stanley tries to dig up the truth in this inventive and darkly humorous tale of crime and punishment--and redemption.

Includes a double bonus: an excerpt from Small Steps, the follow-up to Holes, as well as an excerpt from Louis Sachar's new middle-grade novel, Fuzzy Mud. "A smart jigsaw puzzle of a novel." --The New York Times WINNER OF THE BOSTON GLOBE-HORN BOOK AWARD
A NEW YORK TIMES BOOK REVIEW NOTABLE CHILDREN'S BOOK
SELECTED FOR NUMEROUS BEST BOOK OF THE YEAR AND ALA HONORS

"If you take a bad boy and make him dig a hole every day in the hot sun, it will turn him into a good boy." Such is the reigning philosophy at Camp Green Lake, a juvenile detention facility where there is no lake, and there are no happy campers. In place of what used to be "the largest lake in Texas" is now a dry, flat, sunburned wasteland, pocked with countless identical holes dug by boys improving their character. Stanley Yelnats, of palindromic name and ill-fated pedigree, has landed at Camp Green Lake because it seemed a better option than jail. No matter that his conviction was all a case of mistaken identity, the Yelnats family has become accustomed to a long history of bad luck, thanks to their "no-good-dirty-rotten-pig-stealing-great-great-grandfather!" Despite his innocence, Stanley is quickly enmeshed in the Camp Green Lake routine: rising before dawn to dig a hole five feet deep and five feet in diameter; learning how to get along with the Lord of the Flies-styled pack of boys in Group D; and fearing the warden, who paints her fingernails with rattlesnake venom. But when Stanley realizes that the boys may not just be digging to build character--that in fact the warden is seeking something specific--the plot gets as thick as the irony.

It's a strange story, but strangely compelling and lovely too. Louis Sachar uses poker-faced understatement to create a bizarre but believable landscape--a place where Major Major Major Major of Catch-22 would feel right at home. But while there is humor and absurdity here, there is also a deep understanding of friendship and a searing compassion for society's underdogs. As Stanley unknowingly begins to fulfill his destiny--the dual plots coming together to reveal that fate has big plans in store--we can't help but cheer for the good guys, and all the Yelnats everywhere. (Ages 10 and older) --Brangien Davis

Winner of the Newbery Medal