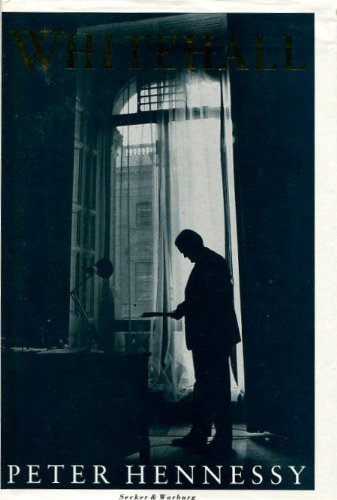 A chronicle of the history of Whitehall from the Norman conquest to Norman Strauss. It gives an analysis of present-day ministries and an examination of the British civil service.

'Mr Hennessy has at last produced his magnum opus - more than 800 pages chronicling the history of Whitehall from the Norman Conquest to Norman Strauss. Along the way we also get an analysis of present-day ministries, a reform tract and a succession of the Great and Good...It is the best account of the British Civil Service ever produced. More than that, it is also, to use Edward Bridge's favourite word, enormous fun.' Robert Harris, Observer; 'The most thorough examination of the civil service and her ways yet published. It is ambitious in intent, sweeping in scope, meticulous in detail and penetrating in analysis. His judgements are fair, and sure to disappoint the ideologues of both left and right. Whitehall looks set to become the standard work on the ways and byways of a hugely important and underexposed part of national life.' Jeremy Paxman, Independent; 'This is an outstanding book by a historian and journalist who has himself become something of a national institution...Present and future ministers, whether seeking to alter the machine or merely to comprehend its puzzling idiom and culture, are certain to regard Hennessy's brilliant investigation as the indispensable guide.' Ben Pimlott, Sunday Times

Peter Hennessy reported Whitehall for ten years, mainly for The Times, The Economist and the Financial Times. He is Professor of Contemporary History, at the University of London, and is married with two daughters. His most recent book is The Prime Minister (2000).