Items related to Unbowed: My Autobiography 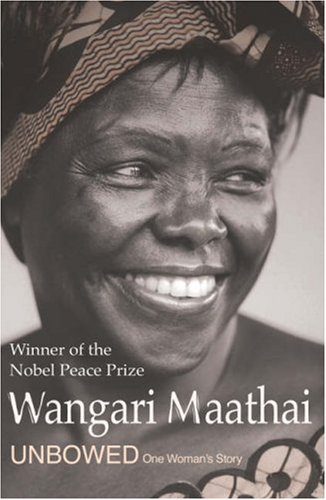 Born in a rural Kenyan village in 1940, Wangari Maathai was already an iconoclast as a child, determined to get an education even though most African girls then were uneducated. In her remarkable and inspiring autobiography, she tells of her studies with Catholic missionaries, earning bachelors and master's degrees in the United States, and becoming the first woman both to earn a PhD and to head a university department in Kenya. She tells of her numerous run-ins with the brutal government of Daniel arap Moi and of the political and personal reasons that compelled her, in 1977, to establish the Green Belt Movement, which spread from Kenya across Africa, and which helps restore indigenous forests while assisting rural women by paying them to plant trees in their villages. Maathai's extraordinary courage and determination helped transform Kenya's government into the democracy in which she now serves as Deputy Minister for the Environment and Natural Resources and as a Member of Parliament. Eventually her achievement was internationally recognized in the Nobel Peace Prize, awarded in recognition of her 'contribution to sustainable development, human rights, and peace'. In "Unbowed", we are in the presence of a hugely charismatic yet humble woman whose remarkable story carries with it an inspiring message of hope. Hers is an extraordinary story, spanning different worlds and changing times, and revealing what the courage, determination, tenacity and humour of one good woman can achieve; how as small a thing as planting a seedling and watering it can made all the difference in the world.

'Wangari Maathai's Memoir is direct. Honest, and beautifully written - a gripping account of modern Africa's trials and triumphs, a universal story of courage, persistence, and success against great odds in a noble cause.' -- Bill Clinton

`As this inspiring memoir shows Maathai's work is about a lot more than getting women to plant trees ... The more difficulties Maathai faced, the more determined she became ... Her book wonderfully demonstrates that you don't need to be in a position of power to start doing something about your environment.' -- The Sunday Times

`Maathai's book is frank and moving ... like a Nelson Mandela or a Mahatma Gandhi, Maathai stands way above most mortals.'
-- The Guardian

The compelling autobiography of Wangari Maathai, Kenyan peace activist and environmentalist, who in 2004 became the first African woman to win the Nobel Peace Prize.

Book Description Hardback. Condition: Very Good. The book has been read, but is in excellent condition. Pages are intact and not marred by notes or highlighting. The spine remains undamaged. Seller Inventory # GOR001378268

Book Description William Heinemann Ltd, 2007. Hardcover. Condition: Good. Previously water damaged, slight waving to the page edges Good condition is defined as: a copy that has been read but remains in clean condition. All of the pages are intact and the cover is intact and the spine may show signs of wear. The book may have minor markings which are not specifically mentioned. Most items will be dispatched the same or the next working day. Seller Inventory # wbb0015978455

Book Description William Heinemann/Random House, London, UK, 2006. Hardcover. Condition: Near Fine. Dust Jacket Condition: Near Fine. 1st Edition. William Heinemann/Random House, London, UK. 2006. Hardcover. First Printing by Line Number. Book is tight, square, and unmarked but for a small tree drawing on the memorial page which might be from the author. Book Condition: Near Fine; bumping at head and tail. DJ: Near Fine; NOT Price Clipped (17.99 GBP); bumping at head and tail. Black boards and spine with bright gilt lettering on the spine. 314 pp 8vo. Born in a Kenyan village in 1940 the author went on to earn degrees up to Ph.D and head a university department in Kenya. She had problems with the ruling party, was exiled, and started the Green Belt Movement across Africa to help restore indigenous forests while assisting rural woman by paying them to plant trees in their villages. A story of courage, tenacity, and determination. A clean very presentable copy in a Brodart mylar jacket. Seller Inventory # 007947

Book Description William Heinemann Ltd, 2007. Hardcover. Condition: Very Good. First Edition. A hardback First Edition in Very Good or better unused condition, sticker removal mark to ffe. otherwise Fine, in a similar dustjacket. This book is in stock now, in our UK premises. Photos of most of our books are available - please ask, as dustjacket and cover illustrations vary, and unless the accompanying image is marked 'Bookseller Image', it is an Abebooks Stock Image, NOT our own. Overseas buyers also note that shipping rates apply to packets of 750g and under, and should the packed weight of an item exceed this we reserve the right to ship via 'Economy', or request extra postage prior to fulfilling the order, or cancel. Seller Inventory # mon0000114345