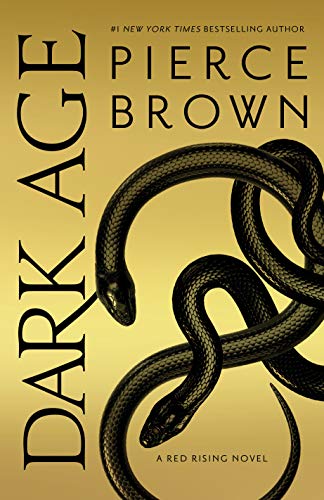 NEW YORK TIMES BESTSELLER - The bestselling author of Morning Star returns to the Red Rising universe with the thrilling sequel to Iron Gold.

"Brown's plots are like a depth charge of nitromethane dropped in a bucket of gasoline. His pacing is 100% him standing over it all with a lit match and a smile, waiting for us to dare him to drop it."--NPR He broke the chains. Then he broke the world.... A decade ago Darrow led a revolution, and laid the foundations for a new world. Now he's an outlaw. Cast out of the very Republic he founded, with half his fleet destroyed, he wages a rogue war on Mercury. Outnumbered and outgunned, is he still the hero who broke the chains? Or will he become the very evil he fought to destroy? In his darkening shadow, a new hero rises. Lysander au Lune, the displaced heir to the old empire, has returned to bridge the divide between the Golds of the Rim and Core. If united, their combined might may prove fatal to the fledgling Republic. On Luna, the embattled Sovereign of the Republic, Virginia au Augustus, fights to preserve her precious demokracy and her exiled husband. But one may cost her the other, and her son is not yet returned. Abducted by enemy agents, Pax au Augustus must trust in a Gray thief, Ephraim, for his salvation. Far across the void, Lyria, a Red refugee accused of treason, makes a desperate bid for freedom with the help of two unlikely new allies. Fear dims the hopes of the Rising, and as power is seized, lost, and reclaimed, the worlds spin on and on toward a new Dark Age. Don't miss any of Pierce Brown's Red Rising Saga:
RED RISING - GOLDEN SON - MORNING STAR - IRON GOLD - DARK AGE

PRAISE FOR PIERCE BROWN AND HIS RED RISING SAGA

Dark Age "[Pierce] Brown's plots are like a depth charge of nitromethane dropped in a bucket of gasoline. His pacing is 100 percent him standing over it all with a lit match and a smile, waiting for us to dare him to drop it."
--NPR "An epic story of rebellion, social unrest and sacrifice."
--Orlando Sentinel "Dark Age proves that Brown has truly become a master."
--The Geekiary "Much like A Song of Ice and Fire's George R. R. Martin, Brown is an author who is interested in exploring the consequences of his protagonist's actions. Revolution doesn't come without a price and no one can stay a hero forever. . . . Dark Age continues the trend of compelling characters, fast plotting, action, and the feeling that no one is truly safe and no one is who you think they are."
--The Mary Sue Iron Gold "Complex, layered . . . mature science fiction existing within the frame of blazing space opera . . . done in a style [that] borders on Shakespearean."--NPR "[A] thoughtful blend of action, intrigue, and prosaic human drama."--Publishers Weekly (starred review) "Fascinating . . . This is one you absolutely will have to read."--The BiblioSanctum Morning Star "A page-turning epic filled with twists and turns."--Booklist (starred review) Golden Son "In a word, Golden Son is stunning. Among science fiction fans, it should be a shoo-in for book of the year."--Tordotcom Red Rising "[A] spectacular adventure . . . one heart-pounding ride . . . Pierce Brown's dizzyingly good debut novel evokes The Hunger Games, Lord of the Flies, and Ender's Game."--Entertainment Weekly About the Author:

Pierce Brown is the #1 New York Times bestselling author of Red Rising, Golden Son, Morning Star, Iron Gold, and Dark Age. His work has been published in thirty-three languages and thirty-five territories. He lives in Los Angeles, where he is at work on his next novel.