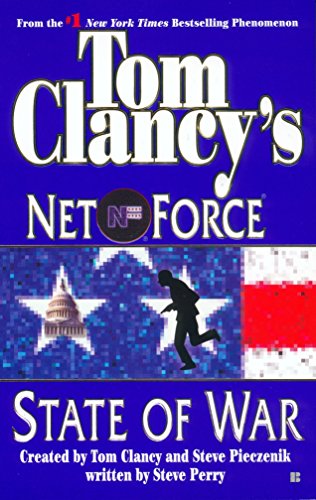 From the #1 New York Times bestselling creators of Op-Center comes a different kind of law enforcement.

In the year 2010, computers are the new superpowers. Those who control them control the world. To enforce the Net Laws, Congress creates the ultimate computer security agency within the FBI: Net Force(R).

Minor viruses are eating away at the Net Force computers. The e-mail shut-downs and flickering monitors are hardly emergencies--but they've been keeping the tech department hopping. Same with the sudden rash of time-consuming lawsuits. No one in Net Force has a moment to spare, which is exactly the way Mitchell Townsend Ames wants it. Because when the shadowy mastermind launches his master plan, he wants Net Force to be looking the other way...

A little more than thirty years ago Tom Clancy was a Maryland insurance broker with a passion for naval history. Years before, he had been an English major at Baltimore's Loyola College and had always dreamed of writing a novel. His first effort, The Hunt for Red October, sold briskly as a result of rave reviews, then catapulted onto the New York Times bestseller list after President Reagan pronounced it "the perfect yarn." From that day forward, Clancy established himself as an undisputed master at blending exceptional realism and authenticity, intricate plotting, and razor-sharp suspense. He passed away in October 2013.

Book Description Condition: New. With minor viruses eat away at the Net Force computers and a sudden rash of time-consuming lawsuits, the tech department is kept hopping. No one in Net Force has a moment to spare, which is exactly how Mitchell Townsend Ames wants it. Because when the shadowy mastermind launches his plan, he wants Net Force to be looking the other way. Original. Seller Inventory # 9780425188132