Items related to The Chestnut Soldier 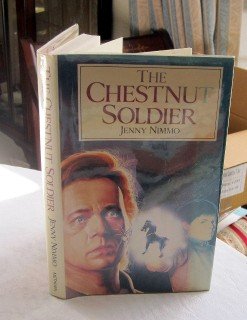 The concluding part of the SNOW SPIDER trilogy, following THE SNOW SPIDER and EMLYN'S MOON. Four years after Gwyn was given the five magic gifts, the night the soldier Evan Llyr seeks refuge in the village, Gwyn takes out the gift his grandmother warned him against: the mutilated figure of a horse. First published iin 1994.

Jenny Nimmo is the author of the NEW YORK TIMES and USA TODAY bestselling Children of the Red King series as well as GRIFFIN'S CASTLE, THE DRAGON'S CHILD, and the award-winning Magician Trilogy, all published by Orchard Books. Several of her books have been awarded and shortlisted for the Smarties Prize, the Carnegie Medal, the Whitbread Award, and the WH Smith Mind-Boggling Books Award. She lives with her husband in an old mill in Wales.

Book Description -. Hardcover. Condition: Very Good. The Chestnut Soldier This book is in very good condition and will be shipped within 24 hours of ordering. The cover may have some limited signs of wear but the pages are clean, intact and the spine remains undamaged. This book has clearly been well maintained and looked after thus far. Money back guarantee if you are not satisfied. See all our books here, order more than 1 book and get discounted shipping. Seller Inventory # 7719-9780416114027