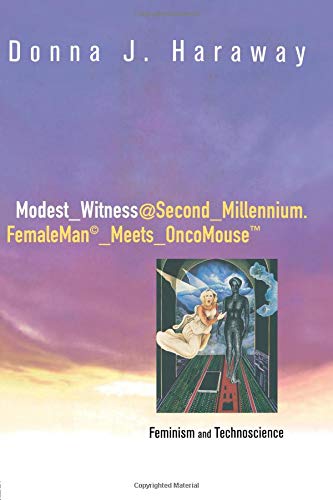 The book's title is an e-mail address. With it, Haraway locates herself and her readers in a sprawling net of associations more far-flung than the Internet. The address is not a cozy home. There is no innocent place to stand in the world where the book's author figure, FemaleMan, encounters DuPont's controversial laboratory rodent, OncoMouse.

"Donna Haraway writes about science like nobody else. She's exploring new territory, she's drawing new maps, she's onto something--the metaphors come thick and fast. Love her or loathe her, you ignore her at your peril."
-"New Scientist
"Haraway's 'modest witness' is a fascinating figure....In a contribution that is by itself worth the price of the book, Haraway produces a wonderfully thoughtful and complex account of...the interpenetration of biology and capitalism, two central players on the stage of politics....Haraway has produced a volume that richly rewards the hard work and generous literacy it demands of its reader. It is challenging, powerful, and unsettling to comfortable notions worth distressing."
-"LSojourner
"A mixture of passionate polemic, abtruse theory, and technological musing."
-"Detroit Free Press
"A conversation with Haraway is an experience you don't soon forget."
-"Santa Cruz County Sentinel
"It can change the way you think."
-"San Francisco Examiner and Chronicle

Haraway explores the world of contemporary technoscience through the role of stories, figures, dreams, theories, advertising, scientific advances and politics. Kinship relations among the many cyborg creatures produced in the late twentieth-century - in nuclear research, genetic engineering, reproductive technologies, computer-mediated representational practices and mutations in biological approaches to race' - are also discussed. Beginning with the Modest Witness, the key figure in the Science Revolution, Haraway shows us the trouble lurking in race and gender-marked practices for attesting to matters of fact. Lynn Randolph's paintings, developed in co-operation with Donna Haraway, visualize dramatically the complex imagery of Modest Witness.