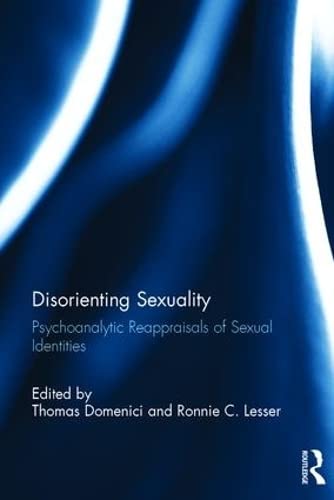 Disorienting Sexuality exposes the biases against gay men and lesbians in psychoanalytic theory and practice. In the introduction, Domenici and Lesser draw a brief history of anti-homosexual sentiment in psychoanalysis. The book then moves into essays written by lesbian and gay psychoanalysts seeking to have a voice in the reshaping of psychoanalytic theories of sexuality. The second section is devoted to presenting different theoretical perspectives for understanding both homosexuality and heterosexuality. Disorienting Sexuality concludes with the personal narratives of gay and lesbian psychoanalysts.

"The essays in this volume are passionate, provocative, often brilliant, always illuminating. Together, they explore the most fundamental questions about the nature of desire, sexuality, gender, and psychoanalytic discourse itself. I cannot imagine a reader who would not come away from this volume with broadened vision and deepened understanding of issues which are among the most central and most vexing in psychoanalysis today."
-Jay Greenberg, Ph. D., Training and Supervising Analyst, William Alanson White Institute and Editor, "Contemporary Psychoanalysis
"This stimulating volume represents a vital piece of work in the transformation of psychoanalysis. Whereas up until now the psychoanalytic discussion of homosexuality has treated it as mainly a condition to be analyzed, these essays, mostly by gay and lesbian analysts, take homosexuality as a position from which to critique established ideas about sexuality and gender. Working with an intimate and sophisticated knowledge of bothclinical practice and contemporary theory, these writings expose crucial problems in our discipline and open up questions of sexuality and gender in important ways.."
-Jessica Benjamin, author of "The Bonds of Love and "Like Subjects, Love Objects
"All of the articles are well documented and are written with authority . . . Recommended."
-"Library Journal
..."an important contribution to the changing views toward sexuality and identity...."
- "Journal of Religion and Health