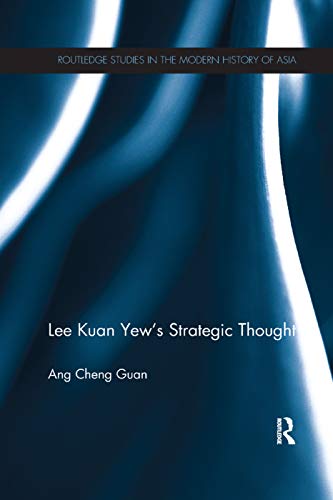 Lee Kuan Yew, as the founding father of independent Singapore, has had an enormous impact on the development of Singapore and of Southeast Asia more generally. Even in his 80s he is a key figure who continues to exert considerable influence from behind the scenes. This book presents a comprehensive overview of Lee Kuan Yew’s strategic thought. It charts the development of Singapore over the last six decades, showing how Lee Kuan Yew has steered Singapore to prosperity and success through changing times. It analyses the factors underlying Lee Kuan Yew’s thinking, discusses his own writings and speeches, and shows how his thinking on foreign policy, security and international relations has evolved over time.

'[Lee Kuan Yew's Strategic Thought] by a distinguished Singaporean historian of the Cold War in South East Asia, [is] a close and detailed reading and analysis of Lee Kuan Yew's expressions, through speeches and articles, on the evolution of regional international relations from before Singapore's expulsion from Malaysia in 1965 to the near present. [It is] a  thoroughly documented account of Singapore's attempts to come to terms with regional and global changes both during and subsequent to the Cold War.' – Robert H. Taylor, Asian Affairs, Volume 44, Issue 3, 2013

Ang Cheng Guan is Associate Professor and Head of the Humanities and Social Studies Education Academic Group of the National Institute of Education, Singapore.