Items related to Ethics and the Laws of War: The moral justification...

Ethics and the Laws of War: The moral justification of legal norms (Contemporary Security Studies) 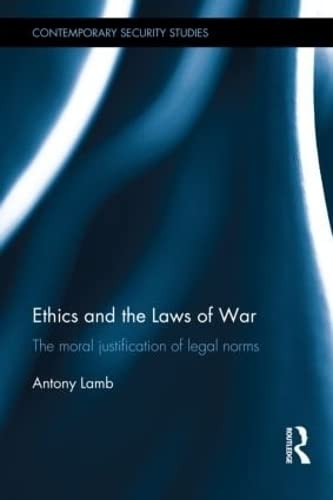 This book is an examination of the permissions, prohibitions and obligations found in just war theory, and the moral grounds for laws concerning war.

Pronouncing an action or course of actions to be prohibited, permitted or obligatory by just war theory does not thereby establish the moral grounds of that prohibition, permission or obligation; nor does such a pronouncement have sufficient persuasive force to govern actions in the public arena. So what are the moral grounds of laws concerning war, and what ought these laws to be?

Adopting the distinction between jus ad bellum and jus in bello, the author argues that rules governing conduct in war can be morally grounded in a form of rule-consequentialism of negative duties. Looking towards the public rules, the book argues for a new interpretation of existing laws, and in some cases the implementation of completely new laws. These include recognising rights of encompassing groups to necessary self-defence; recognising a duty to rescue; and considering all persons neither in uniform nor bearing arms as civilians and therefore fully immune from attack, thus ruling out ‘targeted’ or ‘named’ killings.

This book will be of much interest to students of just war theory, ethics of war, international law, peace and conflict studies, and Security Studies/IR in general.

'In conclusion, this book is recommended to anyone who wants to learn more about the theory of just war, as well as the ethics and morality of international laws governing war.' - Sarah Bernard-Lacaille, University of Quebec, Canada, Revue québécoise de droit international

Antony Lamb is a Lecturer at Coleg Gwent, South Wales. He was awarded a Ph.D. at the University of Bristol in 2012. His research interests focus on the application and development of the just war paradigm to the changing face of conflict.

1. Ethics and the Laws of War: The Moral Justification of Legal Norms

2. Ethics and the Laws of War: The Moral Justification of Legal Norms (Contemporary Security Studies)

3. Ethics and the Laws of War: The Moral Justification of Legal Norms

4. Ethics and the Laws of War: The Moral Justification of Legal Norms (Contemporary Security Studies)