Items related to The Economic Decline of Empires (Economic History) 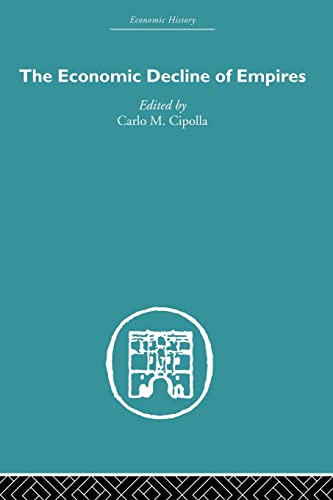 The question of why empires decline and fall has attracted the attention of historians for centuries, but remains fundamentally unsolved. This unique collection is concerned with the purely economic aspects of decline. It can be observed of empires in the process of decline that their economies are generally faltering. Here the similarities in different cases of economic decline are identified, bearing in mind that individual histories are characterized by important elements of originality.

In his introduction, Professor Cipolla points out that improvements in standards of living brought about by a rising economy lead to more and more people demanding to share the benefits. Incomes increase and extravagances develop, as new needs begin to replace those which have been satisfied. Prosperity spreads to neighbouring countries, which may become a threat and force the empire into greater military expenditure. For these and other reasons, public consumption in mature empires has a tendency to rise sharply and outstrip productivity and, in general, empires seem to resist change. The ten articles in this collection, first published in 1970, examine separate cases of economic decline, from Rome and Byzantium to the more recent histories of the Dutch and Chinese empires, and demonstrate both the resemblances and the peculiarly individual characteristics of each case.

1. The Economic Decline of Empires

2. The Economic Decline of Empires

3. The Economic Decline of Empires

5. The Economic Decline of Empires