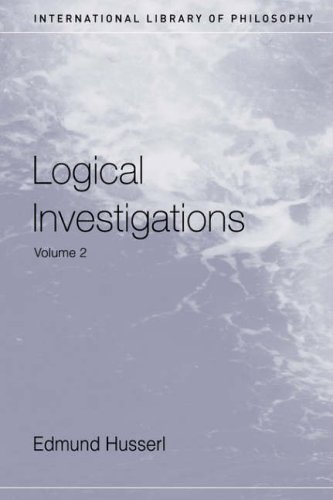 Coinciding with the renewed interest in Husserl and the origins of phenomenology, Logical Investigations, his most famous and influential work, is presented here in paperback for the first time.

'...Most welcome. For years students and teachers of Husserl's 'breakthrough' work, as he calls it, have had to contend with the original hardcover edition that was almost as inaccessible as it was expensive...members of graduate seminars can now avail themselves of a reasonably priced, complete edition...Adding to the attrativeness of these editions are their prefaces and introductions...In his brief preface Dummett notes the importance and potential of the work, given its timely traditions. Moran's substantial introduction is richly documented (the footnotes are a treasure trove) and lucidly written.' - Notre Dame Philosophical Reviews

Edmund Husserl is widely regarded as one of the most influential philosophers of the twentieth century. The founder of phenomenology, the Logical Investigations is his most famous work. Published in two volumes in 1900, it had a decisive impact on the direction of twentieth century philosophy. It is one of the few works to have influenced philosophers as far apart as Frege and Heidegger and a crucial impact on the development of both continental and analytic philosophy. This is the first time both volumes of this classic work, translated by J.N.Findlay have been available in paperback. They include a new introduction by Dermot Moran, placing the Logical Investigations in historical context and bringing out its importance for contemporary philosophy. These paperback editions of both volumes also include a new preface by Sir Michael Dummett.

Book Description Paperback. Condition: New. Language: English. Brand new Book. Edmund Husserl is the founder of phenomenology and the Logical Investigations is his most famous work. It had a decisive impact on twentieth century philosophy and is one of few works to have influenced both continental and analytic philosophy.This is the first time both volumes have been available in paperback. They include a new introduction by Dermot Moran, placing the Investigations in historical context and bringing out their contemporary philosophical importance.These editions include a new preface by Sir Michael Dummett. Seller Inventory # AA69780415241908