Items related to A Dictionary of British Folk-Tales in the English Language... 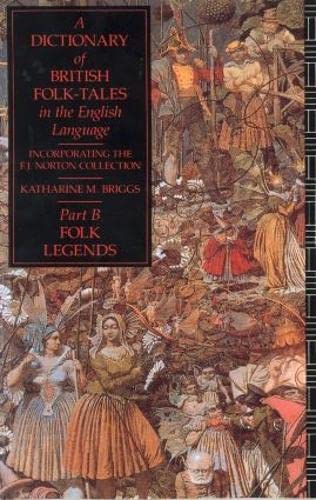 A classic in folklore scholarship arranged in 2 parts. Folk Narratives contains tales told for edification or delight, but not thought to be factually true.Folk Legends presents tales the tellers believed to be records of actual events.

First published in 1970, the "Dictionary of British Folk-Tales" is now regarded as a classic in folklore scholarship. Arranged in two parts, the first, "Folk Narratives", contains those tales told for edification or delight, but not thought to be factually true. The second, "Folk Legends", presents tales believed by the tellers to be records of things that actually happened. Folk legends are much commoner in Britain than folk narratives, and this second part of the dictionary gives a representative collection of them. They are arranged mainly under subjects treated: black dogs, bogies, devils, dragons, fairies, ghosts, giants, historical legends, local legends, origin myths, saints, the supernatural and witches. Many of the tales are given in full, some are slightly shortened and many others are summarized. The sources are given in each case - whether medieval, from 19th-century collectors, or from current oral traditions. The first part is divided into five groups: fables and exempla, fairy tales, jocular tales, novelle, and nursery tales.

The fables are animal stories after the manner of Aesop, that point to a moral or satarize human frailties, and the exempla too are tales used for moral illustration. The fairy tales are narratives containing or hinging upon supernatural happenings, while the jocular tales form a great body of drolls, noodle stories, and bawdy tales. The novelle are narratives in which there is no explicitly supernatural element, and the nursery tales include both tales obviously invented for small children, and tales of horror. Each part of the dictionary includes a bibliography, a tale-type or classified index, and an index of story titles.

1. A Dictionary of British Folk-Tales in the English Language Part B

2. A Dictionary of British Folk-Tales in the English Language Part B

3. A Dictionary of British Folk-Tales in the English Language Part B

4. A Dictionary of British Folk Tales in the English Language: Folk Legends Part B