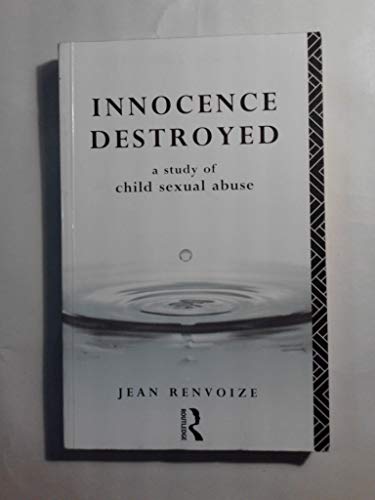 How common is child sexual abuse? How can victims and abusers best be treated? In Innocence Destroyed Jean Renvoize uses interviews with victims and with experienced professionals, as well as new data from Britain, North America and Australia, to give a clear picture of the problem of child sexual abuse, its extent, its effects, and the most up-to-date recommendations for treating its victims and preventing its recurrence. For those new to the subject, her book provides a readable account of a complex area, and for the more experienced worker it gives an invaluable overview of the findings of other professionals in the field.

How common is child sexual abuse? How do we recognize it? How can we treat victims and what can be done to prevent abusers from abusing again? Innocence Destroyed investigates these difficult questions. It shows that too many people still believe that such abuse is rare and cannot bring themselves to accept that perhaps as many as one-third of women and one-fifth of men experience as children some form of abusive sexual attention, ranging from exposure to intercourse. Jean Renvoize has studied child abuse for many years and is the author of well-known studies in the field, including Children in Danger, Web of Violence and Incest . She has travelled extensively in Britain, the United States and Australia, meeting professionals in the field such as social workers, paediatricians, psychiatrists, police officers, lawyers, doctors and researchers, as well as victims and abusers themselves. Survivors of abuse talked openly to her about their years of pain and their efforts to overcome the effects of their abuse, and their first person' histories illustrate vividly the reality of child sexual abuse.

In addition, Innocence Destroyed builds up a comprehensive picture of the most recent research and professional practice. The author shows that, although considerable advances have been made in the treatment of victims, a great increase in resources needs to be devoted to improvements in the understanding and treatment of abusers, particularly of juvenile offenders, to prevent the continuation of this problem from one generation to the next.

1. INNOCENCE DESTROYED: A STUDY OF