Items related to The Road to Little Dribbling: Adventures of an American...

The Road to Little Dribbling: Adventures of an American in Britain (Random House Large Print) 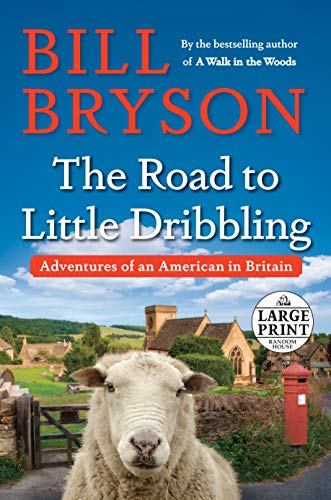 Twenty years ago, Bill Bryson went on a trip around Britain to discover and celebrate that green and pleasant land. The result was Notes from a Small Island, a true classic and one of the bestselling travel books ever written. Now he has traveled about Britain again, by bus and train and rental car and on foot, to see what has changed--and what hasn't. Following (but not too closely) a route he dubs the Bryson Line, from Bognor Regis in the south to Cape Wrath in the north, by way of places few travelers ever get to at all, Bryson rediscovers the wondrously beautiful, magnificently eccentric, endearingly singular country that he both celebrates and, when called for, twits. With his matchless instinct for the funniest and quirkiest and his unerring eye for the idiotic, the bewildering, the appealing, and the ridiculous, he offers acute and perceptive insights into all that is best and worst about Britain today. Nothing is more entertaining than Bill Bryson on the road--and on a tear. The Road to Little Dribbling reaffirms his stature as a master of the travel narrative--and a really, really funny guy.

Praise for The Road to Little Dribbling

"Although he's now entering what he fondly calls his 'dotage, ' the 64-year-old Bryson seems merely to have sharpened both his charms and his crotchets. As the title of The Road to Little Dribbling suggests, he remains devoted to Britain's eccentric place names as well as its eccentric pastimes."
--Alida Becker, The New York Times Book Review "[Y]ou could hardly ask for a better guide to Great Britain than Bill Bryson. Bryson's new book is in most ways a worthy successor and sequel to his classic Notes From A Small Island. Like its predecessor, The Road to Little Dribbling is a travel memoir, combining adventures and observations from his travels around the island nation with recounting of his life there, off and mostly on, over the last four decades. Bryson is such a good writer that even if you don't especially go in for travel books, he makes reading this book worthwhile."
--Nancy Klingener, Miami Herald "...Bryson's capacity for wonder at the beauty of his adopted homeland seems to have only grown with time.... Britain is still his home four decades later, a period in which he went from lowly scribe at small-town British papers to best-selling travel writer. But he retains an outsider's appreciation for a country that first struck him as 'wholly strange ... and yet somehow marvelous."
--Griff Witte, Washington Post "Such a pleasure to once again travel the lanes and walking paths of Britain in the company of Bill Bryson! He's a little older now, and not necessarily wiser, but he's as delightful and irascible a guide as anyone could ever wish to have, as he rediscovers this somewhat careworn land and finds it as endearing (mostly) as ever. It's a rare book that will make me laugh out loud. This one did, over and over."
--Erik Larson, author of Dead Wake and The Devil in the White City "There's a whole lot of "went to a charming little village named Bloke-on-Weed, had a look around, a cupof tea, and moved on" in Bryson's most recent toddle around Britain. Writing 20 years after his bestselling Notes from a Small Island, Bryson concocts another trip through his homeland of 40 years bydetermining the longest distance one could travel in Britain in a straight line... This being Bryson, one chuckles every couple of pages, of course, saying, 'yup, that sounds about right, ' to his curmudgeonly commentary on everything from excess traffic and litter to rude sales clerks. One also feels the thrum of wanderlust as Bryson encounters another gem of a town or pip of a pub. And therein lies the charm of armchair traveling with Bryson. He clearly adores his adopted country. There are no better views, finer hikes, more glorious castles, or statelier grounds than the ones he finds, and Bryson takes readers on a lark of a walk across this small island with megamagnetism."
--Booklist, starred review

"Fans should expect to chuckle, snort, snigger, grunt, laugh out loud and shake with recognition...a clotted cream and homemade jam scone of a treat."
--Sunday Times "At its best as the history of a love affair, the very special relationship between Bryson and Britain. We remain lucky to have him."
--Matthew Engel, Financial Times

"Is it the funniest travel book I've read all year? Of course it is."
--Daily Telegraph "We have a tradition in this country of literary teddy bears--John Betjeman and Alan Bennett among them--whose cutting critiques of the absurdities and hypocrisies of the British people are carried out with such wit and good humour that they become national treasures. Bill Bryson is American but is now firmly established in the British teddy bear pantheon... The fact that this wonderful writer can unerringly catalogue all our faults and is still happy to put up with us should make every British reader's chest swell with pride."
--Jake Kerridge, Sunday Express

"The truly great thing about Bryson is that he really cares and is insanely curious... Reading his work is like going on holiday with the members of Monty Python."
--Chris Taylor, Mashable "There were moments when I snorted out loud with laughter while reading this book in public... He can be as gloriously silly as ever."
--The London Times

"Everybody loves Bill Bryson, don't they? He's clever, witty, entertaining, a great companion... his research is on show here, producing insight, wisdom and startling nuggets of information... Bill Bryson and his new book are the dog's bollocks."
--Independent on Sunday "Stuffed with eye-opening facts and statistics..... Bryson's charm and wit continue to float off the page....Recognising oneself is part of the pleasure of reading Bryson's mostly affable rants about Britain and Britishness."
--Daily Mail

"His millions of readers will probably enjoy this just as much as its predecessor."
--Observer

"We go to him less for insights--though there are plenty of these--and more for the pleasure of his company. And he can be very funny indeed. Almost every page has a line worth quoting."
--Glasgow Herald

"At last, Bill Bryson has got back to what he does best--penning travel books that educate, inform and will have you laughing out loud... I was chuckling away by page four and soaking up his historic facts to impress my mates with. Sure to be a bestseller."
--Sun "Bryson has no equal. He combines the charm and humour of Michael Palin with the cantankerousness of Victor Meldrew and the result is a benign intolerance that makes for a gloriously funny read."
--Daily Express Book Description:

1. The Road to Little Dribbling: Adventures of an American in Britain (Random House Large Print)

2. The Road to Little Dribbling: Adventures of an American in Britain (Random House Large Print)

3. The Road to Little Dribbling: Adventures of an American in Britain (Random House Large Print)