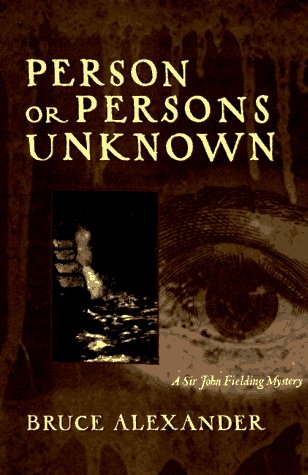 An blind eighteenth-century judge, Sir John Fielding and his assistant and ward, Jeremy Proctor, investigate a series of murders that leads them around streets and alleyways of eighteenth-century London. 15,000 first printing. BOMC Alt.

Bruce Alexander is the pseudonym for a well-known author of fiction and nonfiction. The books in his series include Blind Justice; Murder in Grub Street (named by the New York Times Book Review as a notable book in 1995); Watery Grave; Person or Persons Unknown (named by the Chicago Tribune as one of the best novels of 1997); Jack, Knave and Fool; and Death of a Colonial.

Book Description Putnam Adult, 1997. Hardcover. Condition: New. Dust Jacket Condition: New. 1st Edition. SIGNED by BRUCE ALEXANDER. New and Unread Condition, a beautiful copy of this book. The boards Are Clean, Not Bumped. Fore Edges Are Clean. Not Remaindered marked. Dust Jacket Is In Fine Condition. No Chipping, Crinkles, or tears. Not Price Clipped. Only opened at the original signing event and then lovingly boxed and stored until now - FIRST EDITION/FIRST PRINTING with complete number line beginning in 1. A PRISTINE COPY OF THIS BOOK. DUST JACKET NOW IN PROTECTIVE COVER - THIS IS AN INTRODUCTORY PRICE FOR OUR GRAND RE-OPENING. ALL PRICES WILL BE ADJUSTED IN APRIL TO REFLECT MARKET PRICES. ALL BOOKS HAVE BEEN BOXED IN CLIMATE CONTROLLED STORAGE AND HAVE NOT BEEN TOUCHED BY ANY OTHER HUMAN THAN ME FOR AT LEAST THE LAST 10 YEARS - ALL BOOKS ARE SEALED AND BUBBLE WRAPPED AND SHIPPED IN BOXES - YOU CAN BUY HERE WITH CONFIDENCE KNOWING THAT A BUNCH OF STRANGERS HAVE NOT HANDLED YOUR BOOK -. Signed by Author(s). Seller Inventory # 000475