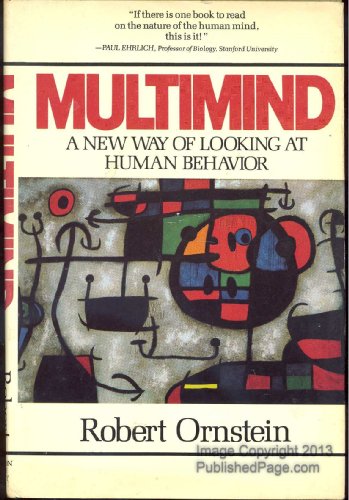 Elaborates a new concept of how the human mind works, on the paradigm of a "mental operating system" composed of diverse separate components with special functions, and discusses split personality and other forms of psychosis in terms of the new concept

Psychologist Robert Ornstein's wide-ranging and multidisciplinary work has won him awards from more than a dozen organizations, including the American Psychological Association and UNESCO. His pioneering research on the bilateral specialization of the brain has done much to advance our understanding of how we think. He received his bachelor's degree in psychology from City University of New York in 1964 and his Ph.D. in psychology from Stanford University in 1968. His doctoral thesis won the American Institutes for Research Creative Talent Award and was published immediately as a book, On the Experience of Time. Since then he has written or co-written more than twenty other books on the nature of the human mind and brain and their relationship to thought, health and individual and social consciousness, which have sold over six million copies and been translated into a dozen other languages. His textbooks have been used in more than 20,000 university classes. Dr. Ornstein has taught at the University of California Medical Center and Stanford University, and he has lectured at more than 200 colleges and universities in the U.S. and overseas. He is the president and founder of the Institute for the Study of Human Knowledge (ISHK), an educational nonprofit dedicated to bringing important discoveries concerning human nature to the general public.