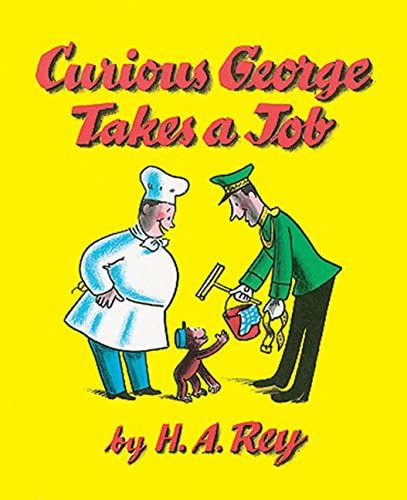 Curious George runs away from the zoo and after many adventures ends up a movie star. "A tale of rippling fun and absurd color-pictures." -- New York Herald-Tribune

Hans Augusto Rey was born in Hamburg, Germany in 1898. As a child, he spent much of his free time in that city's famous Hagenbeck Zoo drawing animals. After serving in the army during World War I, he studied philology and natural science at the University of Hamburg. He then married Margret Rey and they moved to Montmartre for four years. The manuscript for the first Curious George books was one of the few items the Reys carried with them on their bicycles when they escaped from Paris in 1940. Eventually, they made their way to the United States, and Curious George was published in 1941. Curious George has been published in many languages, including French, German, Japanese, Afrikaans, and Norwegian. Additional Curious George books followed, as well as such other favorites as CECILY G. AND THE NINE MONKEYS and FIND THE CONSTELLATIONS.

Book Description Houghton Mifflin, 1974. PaperBack. Condition: New. George becomes an actor and invites all his friends to see the movie he is in. Color illus. 24p. (Ages: 6-9). Seller Inventory # 3017492