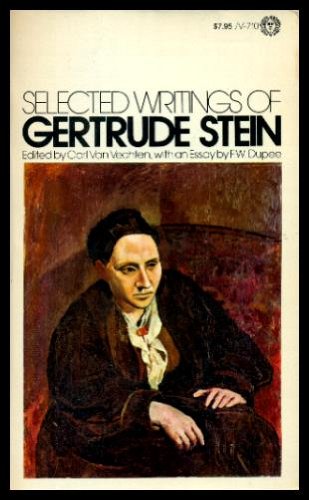 This huge, classic anthology of writings is from every period and every mannner of Gertrude Stein's long and illustrious career.

Gertrude Stein was born in Allegheny, Pennsylvania, on February 3, 1874. At Radcliffe College she studied under William James, who remained her lifelong friend, and then went to Johns Hopkins to study medicine. Abandoning her studies, she moved to Paris with her brother Leo in 1903. At 27 rue de Fleurus, Gertrude Stein lived with Alice B. Toklas, who would remain her companion for 40 years. Not only was she an innovator in literature and a supporter of modern poetry and art, she was the friend and mentor of those who visited her at her now-famous home: Pablo Picasso, Henri Matisse, Jean Cocteau, Ernest Hemingway, F. Scott Fitzgerald, Sherwood Anderson, and Guillaume Apollinaire. Her body of work include Three Lives, Tender Buttons, The Making of Americans, and The Autobiography of Alice B. Toklas.

"This collection, a retrospective exhibit of the work of a woman who created a unique place for herself in the world of letters, contains a sample of practically every period and every manner in Gertrude Stein's career. It includes The Autobiography of Alice B. Toklas in its entirety; selected passages from The Making of Americans; "Melanctha"from Three Lives; portraits of the painters Cezanne, Matisse, and Picasso; Tender Buttons; the opera Four Saints in Three Acts; and poem, plays, lectures, articles, sketches, and a generous portion of her famous book on the Occupation of France, Wars I Have Seen.