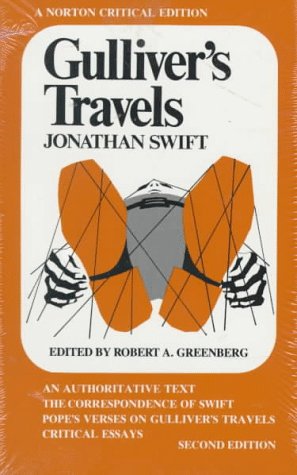 Ted Danson reads the official tie-in to Hallmark Entertainments NBC-TV television event! Imagine the greatest adventure of all time.... Rediscover the immortal story of Lemuel Gulliver and his fantastic voyage. Join him on his journey to the land of the six-inch-high Lilliputians...and into the royal court of the sixty-foot-tall Brobdingnagians. Ascend with him to the flying island of Laputa, whose inhabitants are endowed with uncommon intelligence, but no common sense at all. And follow him into the world of the Houyhnhnms, a race of civilized horses -- lords and masters of the brutish human Yahoos. The tale of a lifetime, "Gulliver's Travels" is filled with action, romance, danger, satirical wit, timeless wisdom, and the high drama only a classic of this caliber can convey. Set sail!

15 critical essays and extracts from Swift's correspondence accompany the text of Gulliver's travels.