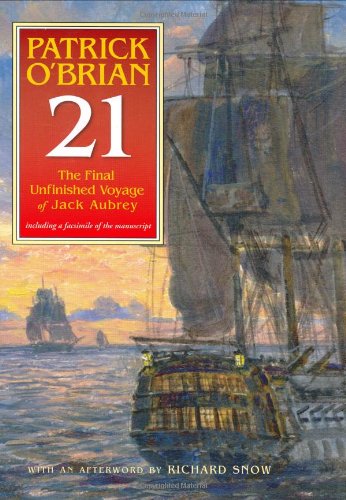 An incomplete, final installment of the Aubrey/Maturin seafaring adventure series features three printed chapters and a facsimile of the manuscript, which includes details about Jack Aubrey's post-promotion mission to the South Africa station and a duel between Stephen Maturin and an impertinent officer.

‘Patrick O'Brian has given a farewell to his followers that is as gracious as it is gallant. And we, in turn, may find some solace in the thought that of all people, this man would not have hated to be taken out of action much as Nelson was: deep in triumph, shedding glory on the service he loved, and still at the peak of his powers.’ Richard Snow

'One of the most compelling and brilliant novelists of his time...Beyond his superbly elegant writing, wit and originality, Patrick O'Brian showed an understanding of the nature of a floating world at the mercy of the wind and the sea which has never been surpassed.' MAX HASTINGS, Evening Standard

Patrick O'Brian's acclaimed Aubrey/Maturin series of historical novels has been described as "a masterpiece" (David Mamet, New York Times), "addictively readable" (Patrick T. Reardon, Chicago Tribune), and "the best historical novels ever written" (Richard Snow, New York Times Book Review), which "should have been on those lists of the greatest novels of the 20th century" (George Will).Set in the Royal Navy during the Napoleonic Wars, O'Brian's twenty-volume series centers on the enduring friendship between naval officer Jack Aubrey and physician (and spy) Stephen Maturin. The Far Side of the World, the tenth book in the series, was adapted into a 2003 film directed by Peter Weir and starring Russell Crowe and Paul Bettany. The film was nominated for ten Oscars, including Best Picture. The books are now available in hardcover, paperback, and e-book format.In addition to the Aubrey/Maturin novels, Patrick O'Brian wrote several books including the novels Testimonies, The Golden Ocean, and The Unknown Shore, as well as biographies of Joseph Banks and Picasso. He translated many works from French into English, among them the novels and memoirs of Simone de Beauvoir, the first volume of Jean Lacouture's biography of Charles de Gaulle, and famed fugitive Henri Cherriere's memoir Papillon. O'Brian died in January 2000.

1. 21: The Final Unfinished Voyage of Jack Aubrey: Including Facsimile of the Manuscript (Book 21)

2. 21: The Final Unfinished Voyage Of Jack Aubrey: Including Facsimile Of The Manuscript

3. 21: The Final Unfinished Voyage Of Jack Aubrey: Including Facsimile Of The Manuscript

4. 21: The Final Unfinished Voyage of Jack Aubrey: Including Facsimile of the Manuscript (Book 21)

5. 21: The Final Unfinished Voyage of Jack Aubrey: Including Facsimile of the Manuscript (Book 21)