Items related to How Apollo Flew to the Moon (Springer Praxis Books... 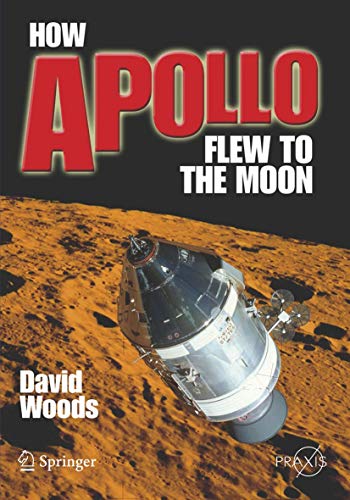 Out of the technological battlefield of World War II came a team of gifted German engineers and designers who developed the vengeance weapon, the V-2, which evolved into the peaceful, powerful Saturn V rocket to take men to the Moon. David Woods tells the exciting story, starting from America s post war astronautical research facilities, that used the V-2 for the development of the robust, resilient and reliable Saturn V launcher. He describes the initial launches through manned orbital spaceflights, comprehensively detailing each step, including computer configuration, the role of ground control, trajectory planning, lunar orbiting, separation of the lander, walking and working on the Moon, retrieval of the lunar astronauts and returning to Earth in this massive technical accomplishment.

"This is, quite simply, one of the five best books ever written about the Apollo programme ... . Most books on Apollo have dealt with the what and when of the subject; this is the first to go deeply into the how of the missions ... . Accompanying the text are many photos and diagrams, and there s also a selection of colour plates. ... There s so much to absorb in this book ... . A superb book in all respects!" --Liftoff, Issue 244, March-April, 2008

"I must personally say that I have found, what I consider, the quintessential book on flying Apollo. If you want to understand the terminology, the various systems, how they functioned together to land on the Moon and return home, then this is the book. While I have written articles on the Apollo Guidance Computer, the star charts used and proofed a new book coming out on the lunar landing, this book explains the mission simply and succinctly. David, this book is really well done." --Larry McGlynn, www.apollotribute.blogspot.com, March, 2008

"A wealth of knowledge regarding the early days of manned space exploration. ... Woods describes each phase of an Apollo Mission in intimate detail, from the stacking of the booster until the crews are safely abroad the aircraft carrier. ... Ultimately, it is an easy read. ... As an armchair historian, I have always wondered about the intricacies on Apollo. Woods book really satisfied my curiosity about systems and people." --James M. Busby, Space Times, Vol. 47 (3), 2008

At the start of the twenty-first century, there is a new exodus to the Moon as many of the world's most powerful countries bring their gaze to our natural satellite. China and Japan have already sent probes into orbit around it and the United States is planning to disturb its dust once more after a lapse of half a century.

That first flurry of exploration was begun by an American president who was stung by the pioneering space successes of the Soviet Union. In reply, the United States gathered the best of its engineers and set itself the goal of reaching the Moon within a decade.

In How Apollo Flew to the Moon, author David Woods tells the exciting story of how the resulting Apollo flights were conducted by following a virtual flight to the Moon and back. From launch to splashdown, he hitches a ride in the incredible spaceships that took men to another world, exploring each step of the journey and detailing the enormous range of disciplines, techniques and procedures the Apollo crews had to master. While describing the tremendous technological accomplishment involved, he adds the human dimension by calling on the testimony of the people who were there at the time.

The book contains a wealth of fascinating and accessible material: the role of the powerful Saturn V rocket, the day-to-day concerns of human and spacecraft health between two worlds, and the sheer daring involved in travelling to the Moon in the mid-twentieth century.

3. HOW APOLLO FLEW TO THE MOON (SPR