Items related to The Gate of Angels

Fitzgerald, Penelope The Gate of Angels

The Gate of Angels 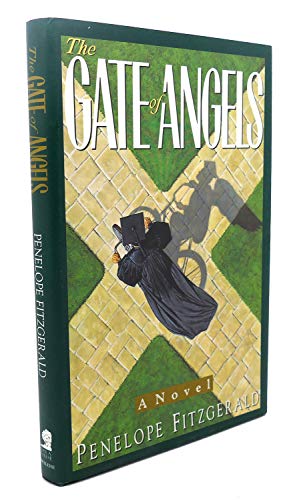 Young Fred Fairly, a junior fellow at St. Angelicus College in 1912 Cambridge, falls in love with the dangerously mysterious Daisy, whom he awakens next to one morning after a freak accident

Penelope Fitzgerald wanted to call her 1990 novel "Mistakes Made by Scientists". On the other hand, she laughingly likened it to a Harlequin doctor-nurse romance. The truth about The Gate of Angels is somewhere in between. The doctor, Fred Fairly, is indeed a young Cambridge scientist, and the nurse, Daisy Saunders, has been ejected from a London hospital. If Fred is to win her love, he must make an appropriately melodramatic sacrifice--leaving the academic sanctum of St Angelicus, a college where all females, even pussycats, are banished ("though the starlings couldn't altogether be regulated").

Daisy, however, suffers from a very non-Harlequin malady, the sort found only in Fitzgerald: "All her life she had been at a great disadvantage in finding it so much more easy to give than to take. Hating to see anyone in want, she would part without a thought with money or possessions, but she could accept only with the caution of a half-tamed animal." Self- protection is certainly not this young woman's strong suit, but we admire her endurance. At one moment, Fred points out that "women like to live on their imagination". Daisy's response? "It's all they can afford, most of them."

Set in Cambridge and London in 1912, The Gate of Angels is a love story and a novel of ideas. Fred, a rector's son, has abandoned religion for observable truths, whereas the undereducated Daisy is a Christian for whom the truth is entirely relative. The novel's strengths lie in what we have come to expect from Fitzgerald: a blend of the hilarious, the out-of-kilter, and the intellectually and emotionally provocative. She confronts her characters with chaos (theoretical and magical), women's suffrage and seemingly impossible choices, and we can by no means be assured of a happy outcome. "They looked at each other in despair, and now there seemed to be another law or regulation by which they were obliged to say to each other what they did not mean and to attack what they wished to defend."

Fitzgerald's novel also records the onslaught of the modern on traditions and beliefs it will fail to obliterate entirely: women as second-class citizens and a class-ridden society in which the poor suffer deep financial and moral humiliation. The author sees the present pleasures--Cambridge jousts in which debaters must argue not what they believe but its exact opposite--and is often charmed by them. But under the light surface, she proffers an elegant meditation on body and soul, science and imagination, choice and chance. Her characters, as ever, are originals, and even the minor players are memorable: one of Fred's fellows, the deeply incompetent Skippey, is "loved for his anxiety", because he makes others feel comparatively calm.

Fitzgerald fills all of her period novels with odd, charming, and disturbing facts and descriptions. Some, like the catalogue of killing medicines Daisy administers, are strictly researched and wittily conveyed: "Over-prescriptions brought drama to the patients' tedious day. Too much antimony made them faint, too much quinine caused buzzing in the ears, too much salicylic acid brought on delirium..." Others are the product of microscopic observation, that is, imagination. Fred's family home is in hyperfertile Blow Halt, a place where no one thinks to buy vegetables, so free are they for the taking. But within this paradise, his mother and sisters are sewing banners for women's suffrage, and nature launches a quiet threat: "Twigs snapped and dropped from above, sticky threads drifted across from nowhere, there seemed to be something like an assassination, on a small scale, taking place in the tranquil heart of summer."

‘Reading a Penelope Fitzgerald novel is like being taken for a ride in a peculiar kind of car. Everything is of top quality – the engine, the coachwork and the interior all fill you with confidence. Then, after a mile or so, someone throws the steering-wheel out of the window.’ Sebastian Faulks

‘A book which delights, amuses, disturbs and provokes reflection, in equal measure. It is a triumph of craftmanship, intelligence and sensibility.’ Scotsman

‘Formidable... no writer is more engaging than Penelope Fitzgerald.’ Spectator

‘Penelope Fitzgerald writes books whose imaginative wholeness and whose sense of what language can suggest is magical. Whichever way you twist the lens of this kaleidoscopic book, you see fresh things freshly.’ Evening Standard

‘The book is short and full of activity. The story moves swiftly in unexpected directions. It is inspiring, funny and touching.’ LRB

‘Gilbert could have written this and Sullivan set it to music. It shows an Edwardian university at Cambridge at its eccentric best. There are so many characters that are a delight. So many foibles and so much fancifying. Fitzgerald is the only author I know who regularly gets reviews pleading her to write longer books.’ Daily Mail

1. The Gate of Angels

2. The Gate of Angels

4. The Gate of Angels