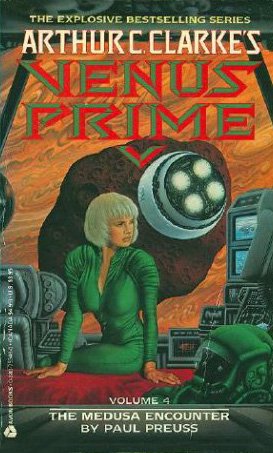 Essef - Recovering from a mission on Mars, Sparta finds herself the guest of the Space Board. But relaxation is short-lived as Sparta soon sets out to investigate the Board itself. It appears that members of Free Spirit, a religious cult bent on galactical control, have infiltrated the Space Board

the fourth volume in a series of science-fiction thrillers evolving from the works of arthur c. clarke, grandmaster of science fiction and author of 2001: a space odyssey.

Her code name is Sparta. Her beauty veils a mysterious past and abilities of superhuman dimension -- the product of advanced biotechnology.

Members of the Free Spirit, a religious cult intending to gain control of all the worlds of our galaxy, have infiltrated the Space Board. As the date of the manned mission into the clouds of Jupiter approaches, Sparta's suspicions grow. She is certain the mission has fallen into the hands of the cult, and she is determined to stop it.

This breathtaking adventure brings together the genius of Arthur C. Clarke and the talents of distinguished science-fiction writer Paul Preuss.

COVER ART BY JIM BURNS, WITH A SPECIAL SECTION OF COMPUTER-GENERATED TECH SPECS AND BLUEPRINTS OF THE SPACECRAFT AND HARDWARE FROM VENUS PRIME BY DARREL ANDERSON.

Paul Preuss began a successful writing career after years of producing documentary and television films and writing screenplays. He is the author of twelve novels, including Venus Prime, Volumes 1, 2 & 3, and the bear-future thrillers Core, Human Error and Starfire. His non-fiction has appeared in The Washington Post, the Los Angeles Times, New York Newsday and the San Francisco Chronicle, besides writing, he has been a science consultant for several film companies. He lives in San Francisco, California.