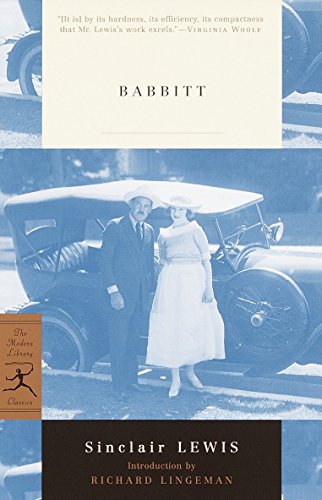 Since 1917 The Modern Library prides itself as The modern Library of the world s Best Books . Its paperback series feature treasured classics, major translations of great works, and rediscoveries of keen literary and historical merit.. Featuring introductions by leading writers, stunning translations, scholarly endnotes and reading group guides. Production values emphasize superior quality and readability. Competitive prices, coupled with exciting cover design make these an ideal gift to be cherished by the avid reader. In the fall of 1920, Sinclair Lewis began a novel set in a fast-growing city with the heart and mind of a small town. For the center of his cutting satire of American business he created the bustling, shallow, and myopic George F. Babbitt, the epitome of middle-class mediocrity. The novel cemented Lewis s prominence as a social commentator. Babbitt basks in his pedestrian success and the popularity it has brought him. He demands high moral standards from those around him while flirting with women, and he yearns to have rich friends while shunning those less fortunate than he. But Babbitt s secure complacency is shattered when his best friend is sent to prison, and he struggles to find meaning in his hollow life. He revolts, but finds that his former routine is not so easily thrown over

is by its hardness, its efficiency, its compactness that Mr. Lewis's work excels --Virginia Woolf

From the author of It Can't Happen Here, a satirical portrait of a town obsessed by capitalism and the 'values' of the marketplace