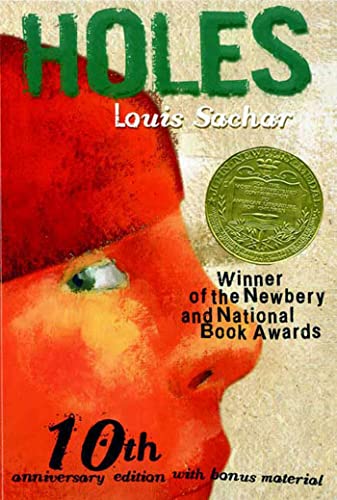 Louis Sachar received great recognition for his groundbreaking story of Stanley Yelnats - a boy with a history of bad luck. As School Library Journal predicted in their starred review of the book when it was first published, "Kids will love Holes." A decade later, the book is still quenching young readers' thirst for a gripping story about a far-reaching family curse, friendship, adventure, endurance, and, finally, a generous helping of good karma.

Celebrate with this special 10th Anniversary Edition, which includes portraits of the author as a little brother (by his big brother), as a husband (by his wife), and as a father (by his daughter), along with photos and Louis Sachar's 1999 Newbery acceptance speech. Vladimir Radunsky, who created the original iconoclastic cover illustration, has made new art from the familiar images. Wrapped in an acetate jacket, this edition is an appealing package that will be equally welcome in public, school, or home libraries.

Holes is a 1998 New York Times Book Review Notable Children's Book of the Year and the winner of the 1998 National Book Award for Young People's Literature, the 1999 Boston Globe - Horn Book Award for Fiction and the 1999 Newbery Medal.

"Stanley Yelnats IV has been wrongly accused of stealing a famous baseball player's valued sneakers and is sent to Camp Green Lake, a juvenile detention home where the boys dig holes, five feet deep by five feet across, in the miserable Texas heat. It's just one more piece of bad luck that's befallen Stanley's family for generations...There is no question, kids will love Holes." --Starred, School Library Journal