Items related to The Sellout: WINNER OF THE MANBOOKER PRIZE 2016

Beatty, Paul The Sellout: WINNER OF THE MANBOOKER PRIZE 2016

The Sellout: WINNER OF THE MANBOOKER PRIZE 2016 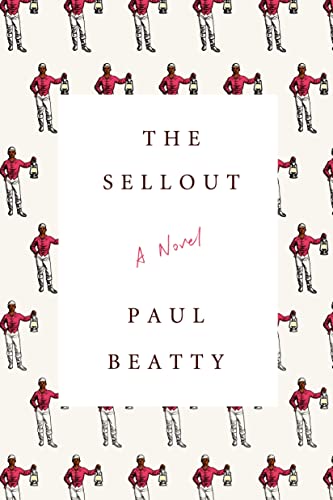 Winner of the 2016 Man Booker Prize

Winner of the 2015 National Book Critics Circle Award in Fiction

A biting satire about a young man's isolated upbringing and the race trial that sends him to the Supreme Court, Paul Beatty's The Sellout showcases a comic genius at the top of his game. It challenges the sacred tenets of the United States Constitution, urban life, the civil rights movement, the father-son relationship, and the holy grail of racial equality--the black Chinese restaurant.

Born in the "agrarian ghetto" of Dickens--on the southern outskirts of Los Angeles--the narrator of The Sellout resigns himself to the fate of lower-middle-class Californians: "I'd die in the same bedroom I'd grown up in, looking up at the cracks in the stucco ceiling that've been there since '68 quake." Raised by a single father, a controversial sociologist, he spent his childhood as the subject in racially charged psychological studies. He is led to believe that his father's pioneering work will result in a memoir that will solve his family's financial woes. But when his father is killed in a police shoot-out, he realizes there never was a memoir. All that's left is the bill for a drive-thru funeral.

Fuelled by this deceit and the general disrepair of his hometown, the narrator sets out to right another wrong: Dickens has literally been removed from the map to save California from further embarrassment. Enlisting the help of the town's most famous resident--the last surviving Little Rascal, Hominy Jenkins--he initiates the most outrageous action conceivable: reinstating slavery and segregating the local high school, which lands him in the Supreme Court.

"The first 100 pages of [Paul Beatty's] new novel, The Sellout, are the most caustic and the most badass first 100 pages of an American novel I've read in at least a decade. I gave up underlining the killer bits because my arm began to hurt . . . [They] read like the most concussive monologues and interviews of Chris Rock, Richard Pryor and Dave Chappelle wrapped in a satirical yet surprisingly delicate literary and historical sensibility . . . The jokes come up through your spleen . . . The riffs don't stop coming in this landmark and deeply aware comic novel . . . [It] puts you down in a place that's miles from where it picked you up." --Dwight Garner, The New York Times

"[The Sellout] is among the most important and difficult American novels written in the 21st century . . . It is a bruising novel that readers will likely never forget." --Kiese Laymon, Los Angeles Times

"The Sellout isn't just one of the most hilarious American novels in years, it also might be the first truly great satirical novel of the century . . . [It] is a comic masterpiece, but it's much more than just that-it's one of the smartest and most honest reflections on race and identity in America in a very long time." --Michael Schaub, NPR.org

"Beatty, author of the deservedly highly praised The White Boy Shuffle (1996), here outdoes himself and possibly everybody else in a send-up of race, popular culture, and politics in today's America . . . Beatty hits on all cylinders in a darkly funny, dead-on-target, elegantly written satire . . . [The Sellout] is frequently laugh-out-loud funny and, in the way of the great ones, profoundly thought provoking. A major contribution." --Mark Levin, Booklist (starred review)

"The Sellout is brilliant. Amazing. Like demented angels wrote it." --Sarah Silverman

"I am glad that I read this insane book alone, with no one watching, because I fell apart with envy, hysterics, and flat-out awe. Is there a more fiercely brilliant and scathingly hilarious American novelist than Paul Beatty?" --Ben Marcus

"Paul Beatty has always been one of smartest, funniest, gutsiest writers in America, but The Sellout sets a new standard. It's a spectacular explosion of comic daring, cultural provocation, brilliant, hilarious prose, and genuine heart." --Sam Lipsyte

From a comic genius at the top of his game comes a biting satire about a young man's isolated upbringing and the race trial that sends him to the Supreme Court.

Book Description Hardcover. Condition: New. Dust Jacket Condition: New. 1st Edition. Farrar, Straus & Giroux, 2016, New York. Hard Cover. Book Condition: New. Dust Jacket Condition: New. Stated "First Edition, 2015", eighth printing with a number line starting at "8". 8-1/2" tall, 288 numbered pages followed by unnumbered pages of "Closure", "Acknowledgements", and "A Note About the Author"; one-piece black binding, electric red lettering on spine only; plain ivory end pages; fore edge is trimmed. Book is new and pristine: it is square, hinges tight, corners not bumped, no dings on edges, head of spine lightly very creased, interior clean and unmarked; no page corners folded or damaged; no staining or discoloration. Jacket is also new and pristine; it is clean; no tears, folds or fading; head and heel of spine undamaged; 1-1/2" circular white-on-gold "WINNER / OF THE / MAN / BOOKER / PRIZE" sticker on front panel above and to the right of the title; publisher's original price of "U.S.A. $26.00 / CANADA $29.99" listed on the upper right corner of front flap. Condition of book and jacket consistent with being brand new and not read. No other discernible or objectionable faults on book or jacket such as marks or writing within, stains, tears, chips, or other damage that would diminish its appearance. No remainder mark, no previous owner markings or inscriptions, not price clipped, not a book club edition, not a former library book. Signed by the author in medium black felt pen near the middle of title page near the fore edge. I have included an authentication slip from the bookstore where I bought the book. Seller Inventory # BMR-2019-2-17-15