Items related to Cibola Burn: Book 4 of the Expanse

Corey, James S. A. Cibola Burn: Book 4 of the Expanse

Cibola Burn: Book 4 of the Expanse 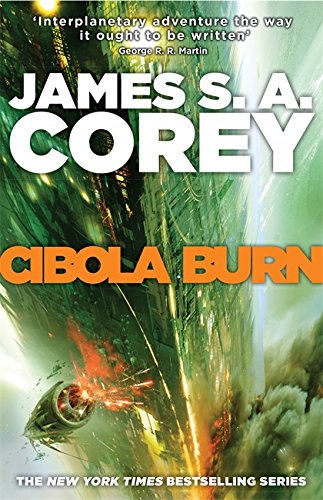 "You can call me a corporation. You can call me a government. I'm the guy here with the most guns, and I say this planet is mine. Now, Captain Holden, was there something you wanted to add?"

The gates have opened the way to thousands of habitable planets, and the land rush has begun. Settlers stream out from humanity's home planets in a vast, poorly controlled flood. Among them, the Rocinante, haunted by the vast, posthuman network of the protomolecule as they investigate what destroyed the great intergalactic society that built the gates and the protomolecule.

But Holden and his crew must also contend with the growing tensions between the settlers and the company which owns the official claim to the planet. Both sides will stop at nothing to defend what's theirs, but soon a terrible disease strikes and only Holden - with help from the ghostly Detective Miller - can find the cure.

Interplanetary adventure the way it ought to be (George R. R. Martin on Leviathan Wakes)

As close as you'll get to a Hollywood blockbuster in book form (io9.com on Leviathan Wakes)

High adventure equalling the best space opera has to offer, cutting-edge technology and a group of unforgettable characters . . . Perhaps one of the best tales the genre has yet to produce (Library Journal on Leviathan Wakes)

1. Cibola Burn: Book 4 of the Expanse

Book Description Paperback. Condition: Good. All orders are dispatched the following working day from our UK warehouse. Established in 2004, we have over 500,000 books in stock. No quibble refund if not completely satisfied. Seller Inventory # mon0005460348