Items related to Quoform: A Novel of the Commonwealth

Foster, Alan Dean Quoform: A Novel of the Commonwealth

Quoform: A Novel of the Commonwealth 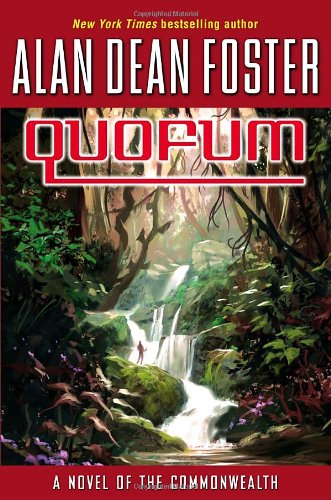 Bestselling author Alan Dean Foster’s new adventure takes place in the amazing Humanx Commonwealth, home of the ever-popular Pip & Flinx. Although the dynamic redhead and his daring minidrag do not appear in Quofum, this knockout thriller sets the stage for their explosive date with destiny in the duo’s final climactic adventure, Flinx Transcendent.

The mission to planet Quofum is supposed to be a quickie for Captain Boylan and his crew. Boylan is tasked with delivering four scientists–two men, one woman, and one thranx–to the unknown world, setting up camp while the experts investigate flora and fauna, then ferrying them safely home.
The first surprise is that Quofum, which regularly slips in and out of existence on Commonwealth monitors, is actually there when Boylan and company arrive. The second surprise is more about what Quofum is not: The planet is not logical, ordered, or rational.

The team encounters three intelligent, warring species–some carbon-based, others silicate-based, all bizarre–along with thousands of unique, often unclassifiable life-forms. Quofum’s wild biodiversity doesn’t appear to be natural. But if it is by design, then by whose, and for what purpose?

There are more revelations, more highly evolved species waiting to be identified, even tantalizing clues to a civilization light-years ahead of the Commonwealth’s. But the crew members are not ready for the real shockers, because none of them expect to find a killer in their midst, or to discover that their spaceship is missing and, with it, all means of communication.

Of course, the marooned teammates know nothing about the Great Evil racing toward the galaxy, and they certainly have never heard of Flinx, the only person with half a chance to stop it. Nor do they know that Quofum could play a crucial role in defeating the all-devouring monster from beyond.
One thing the scientists do know, however, is how to ferret out the truth. But whether that will be enough to alter the course of the oncoming catastrophe is anyone’s guess.

"[An] astonishing riot of life-forms . . . The book is tantamount to a stand-alone, though certainly significant in the greater epic."--Booklist
About the Author:

Alan Dean Foster has written in a variety of genres, including hard science fiction, fantasy, horror, detective, Western, historical, and contemporary fiction. He is the author of the New York Times bestseller Star Wars: The Approaching Storm and the popular Pip & Flinx novels, as well as novelizations of several films including Transformers, Star Wars, the first three Alien films, and Alien Nation. His novel Cyber Way won the Southwest Book Award for Fiction in 1990, the first science fiction work ever to do so. Foster and his wife, JoAnn Oxley, live in Prescott, Arizona, in a house built of brick that was salvaged from an early-twentieth-century miners’ brothel. He is currently at work on several new novels and media projects.