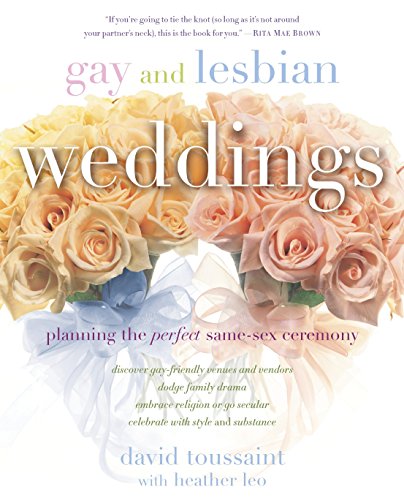 Gay and Lesbian Weddings From invitations to tuxes, homophobia to honeymooning, rituals to rabbis, this guide covers everything the gay bride- and groom-to-be could possibly need to know to plan the perfect dream wedding. Full description

"If you're going to tie the knot (so long as it's not around your partner's neck), this is the book for you."
--RITA MAE BROWN

"I'm recommending Gay and Lesbian Weddings to all of my friends . . . especially the straight ones!"
--DINAH MANOFF "Thank goodness I don't have to consult Amy Vanderbilt anymore!"
--PHRANC "While gay people's struggle to win the right to marry continues, weddings are already happening -- and gay couples, their families, and friends planning their celebration will benefit from the advice and stories in this fun-to-read guide." -Evan Wolfson, Executive Director, Freedom to Marry About the Author:

David Toussaint is the author of Gay and Lesbian Weddings: Planning the Perfect Same-Sex Ceremony. A freelance writer, playwright, actor, and director, he received his first professional writing job at the age of 15, as an assistant to the real estate editor for the Contra Costa Times newspaper in Northern California. His fiction has appeared in the literary journals Literary Potpourri and Snow Monkey, as well as the cyberzines Outsider Ink and The Prose Menagerie. Years ago, his self-produced one-act play, Backstage Bitches, ran for two consecutive summers in New York City. He has served three times as a guest editor for Francis Ford Coppola's online literary magazine, Zoetrope: All-Story Extra.