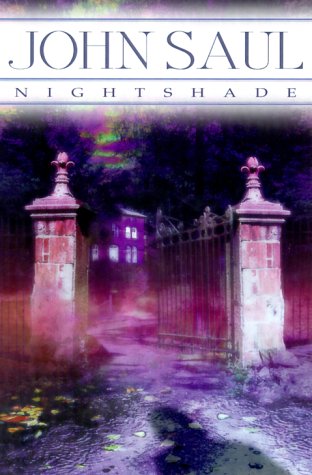 When his senile grandmother comes to stay with him, teenager Matt Moore finds himself caught up in a shameful secret between his mother and his late aunt that haunts both him and his mother, who seeks redemption for her sins. 100,000 first printing.

"ÝSAUL¨ HAUNTS HIS SHADOWY REALM INGENIOUSLY AND PERSISTENTLY. . . . NIGHTSHADE MAY BE HIS MASTERPIECE."
--Providence Journal

"[SAUL] HAUNTS HIS SHADOWY REALM INGENIOUSLY AND PERSISTENTLY. . . . NIGHTSHADE MAY BE HIS MASTERPIECE."
--Providence Journal

JOHN SAUL's first novel, Suffer the Children, published in 1977, was an immediate million-copy bestseller. He has since written nineteen successive bestselling novels of suspense, including The Right Hand of Evil, The Presence, Black Lightning, Guardian, and The Homing. He is also the author of the New York Times bestselling serial thriller The Blackstone Chronicles, initially published in six installments, but now available in one complete volume. Mr. Saul divides his time between Seattle, Washington, and Maui, Hawaii.