Items related to The Proud Tower: A Portrait of the World before the... 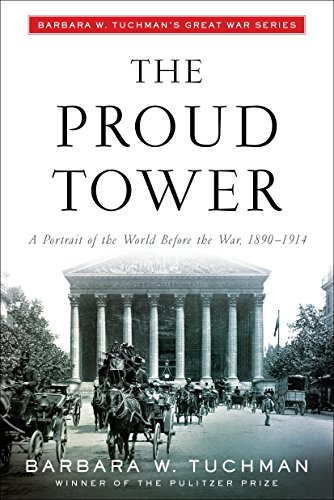 "The diplomatic origins, so-called, of the War are only the fever chart of the patient; they do not tell us what caused the fever. To probe for underlying causes and deeper forces one must operate within the framework of a whole society and try to discover what moved the people in it."
--Barbara W. Tuchman
The fateful quarter-century leading up to the World War I was a time when the world of Privilege still existed in Olympian luxury and the world of Protest was heaving in its pain, its power, and its hate. The age was the climax of a century of the most accelerated rate of change in history, a cataclysmic shaping of destiny.
In The Proud Tower, Barbara Tuchman concentrates on society rather than the state. With an artist's selectivity, Tuchman bings to vivid life the people, places, and events that shaped the years leading up to the Great War: the Edwardian aristocracy and the end of their reign; the Anarchists of Europe and America, who voiced the protest of the oppressed; Germany, as portrayed through the figure of the self-depicted Hero, Richard Strauss; the sudden gorgeous blaze of Diaghilev's Russian Ballet and Stravinsky's music; the Dreyfus Affair; the two Peace Conferences at the Hague; and, finally, the youth, ideals, enthusiasm, and tragedy of Socialism, epitomized in the moment when the heroic Jean Jaurè s was shot to death on the night the War began and an epoch ended.
"Tuchman [was] a distinguished historian who [wrote] her books with a rare combination of impeccable scholarship and literary polish. . . . It would be impossible to read The Proud Tower without pleasure and admiration."
--The New York Times
"Tuchman proved in The Guns of August thatshe could write better military history than most men. In this sequel, she tells her story with cool wit and warm understanding, eschewing both the sweeping generalizations of a Toynbee and the minute-by-minute simplicisms of a Walter Lord."
--Time

"[Barbara W. Tuchman's] Pulitzer Prize-winning The Guns of August was an expert evocation of the first spasm of the 1914-1918 war. She brings the same narrative gifts and panoramic camera eye to her portrait of the antebellum world."--Newsweek

"A rare combination of impeccable scholarship and literary polish . . . It would be impossible to read The Proud Tower without pleasure and admiration."--The New York Times "An exquisitely written and thoroughly engrossing work . . . The author's knowledge and skill are so impressive that they whet the appetite for more."--Chicago Tribune "[Tuchman] tells her story with cool wit and warm understanding."--Time

3. The Proud Tower: A Portrait of the World Before the War, 1890-1914; Barbara W. Tuchman's Great War Series (Paperback or Softback)